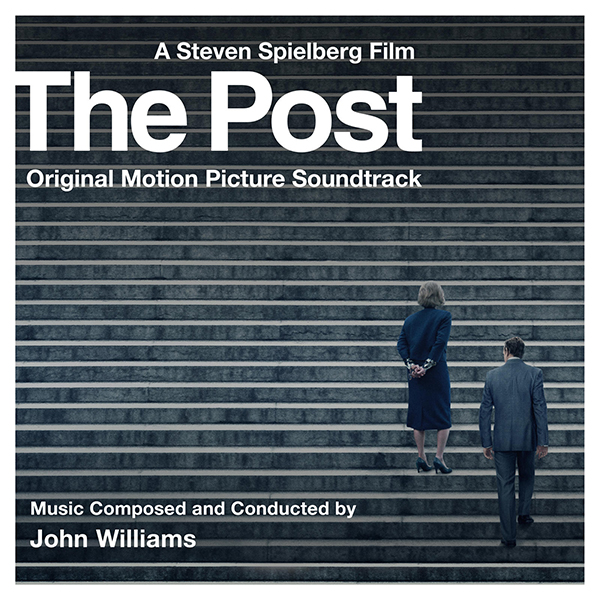 Sony Classical proudly announces the release of THE POST (Original Motion Picture Soundtrack), featuring music by multi-award-winning composer John Williams. The soundtrack will be released digitally on December 22, 2017 and on CD on January 12, 2018. The film opens limited in Los Angeles, New York and Washington, D.C. on December 22, 2017 and wide on January 12, 2018.
ABOUT JOHN WILLIAMS: In a career that spans five decades, John Williams has become one of America’s most accomplished and successful composers for film and for the concert stage. He has served as music director and laureate conductor of one of the country’s treasured musical institutions, the Boston Pops Orchestra, and he maintains thriving artistic relationships with many of the world’s great orchestras, including the Boston Symphony Orchestra, the New York Philharmonic, the Chicago Symphony and the Los Angeles Philharmonic. Mr. Williams has received a variety of prestigious awards, including the National Medal of Arts, the Kennedy Center Honor, the Olympic Order, the AFI Life Achievement Award, five Academy Awards, and numerous Grammy Awards, Emmy Awards and Golden Globe Awards. He remains one of the nation’s most distinguished and contributive musical voices.

Mr. Williams has composed the music and served as music director for more than one hundred films. His 45-year artistic partnership with director Steven Spielberg has resulted in many of Hollywood’s most acclaimed and successful films, including Schindler’s List, E.T.: The Extra-Terrestrial, Jaws, Jurassic Park, Close Encounters of the Third Kind, four Indiana Jones films, Saving Private Ryan, Amistad, Munich, Hook, Catch Me If You Can, Minority Report, A.I.: Artificial Intelligence, Empire of the Sun, The Adventures of TinTin and War Horse. Their latest collaboration was The Post.

Mr. Williams has composed the scores for all eight Star Wars films, the first three Harry Potter films, Superman: The Movie, JFK, Born on the Fourth of July, Memoirs of a Geisha, Far and Away, The Accidental Tourist, Home Alone, Nixon, The Patriot, Angela’s Ashes, Seven Years in Tibet, The Witches of Eastwick, Rosewood, Sleepers, Sabrina, Presumed Innocent, The Cowboys and The Reivers, among many others.

He has worked with many legendary directors, including Alfred Hitchcock, William Wyler and Robert Altman. In 1971, he adapted the score for the film version of Fiddler on the Roof, for which he composed original violin cadenzas for renowned virtuoso Isaac Stern.

He has appeared on recordings as pianist and conductor with Itzhak Perlman, Joshua Bell, Jessye Norman and others.

In addition to his activity in film and television, Mr. Williams has composed numerous works for the concert stage, among them two symphonies, and concertos for flute, violin, clarinet, viola, oboe and tuba. His cello concerto was commissioned by the Boston Symphony Orchestra and premiered by Yo-Yo Ma at Tanglewood in 1994.

One of America’s best known and most distinctive artistic voices, Mr. Williams has composed music for many important cultural and commemorative events. Liberty Fanfare was composed for the rededication of the Statue of Liberty in 1986. American Journey, written to celebrate the new millennium and to accompany the retrospective film The Unfinished Journey by director Steven Spielberg, was premiered at the Americas Millennium concert in Washington, D.C. on New Year’s Eve, 1999. His orchestral work Soundings was performed at the celebratory opening of Walt Disney Concert Hall in Los Angeles. In the world of sport, he has contributed musical themes for the 1984, 1988, and 1996 Summer Olympic Games, the 2002 Winter Olympic Games, and the 1987 International Summer Games of the Special Olympics. In 2006, Mr. Williams composed the theme for NBC’s presentation of NFL Football.

Steven Spielberg directs Meryl Streep and Tom Hanks in The Post, a thrilling drama about the unlikely partnership between The Washington Post’s Katharine Graham (Streep), the first female publisher of a major American newspaper, and editor Ben Bradlee (Hanks), as they race to catch up with The New York Times to expose a massive cover-up of government secrets that spanned three decades and four U.S. Presidents. The two must overcome their differences as they risk their careers – and their very freedom – to help bring long-buried truths to light.

That's tomorrow! I must've missed this one.
Have a wonderful Christmas, Jeremy.