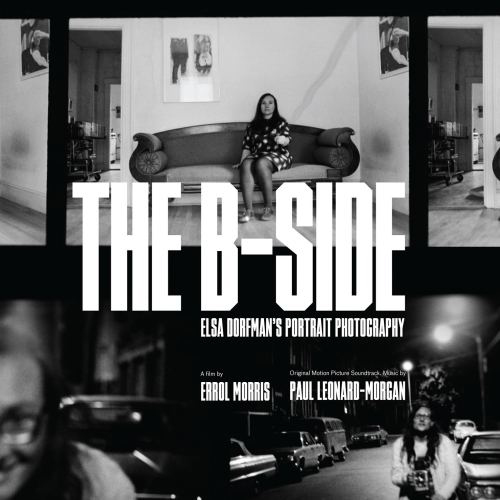 “Errol is quite simply a genius. The way he brings out the personality of Elsa, and also the story, was something I just wanted to help, rather than dominate, with the score,” explained Leonard-Morgan. “Getting to write such simple, sometimes uplifting, sometimes ethereal, but always beautiful music was a great ride - composing an album ‘inspired by’ Elsa, and then seeing how the tracks suited various scenes in the film. It was a totally unique way of scoring, and an incredible experience.”

Portrait photographer Elsa Dorfman found her medium in 1980: the larger-than-life Polaroid Land 20x24 camera. For the next thirty-five years she captured the "surfaces" of those who visited her Cambridge, Massachusetts studio: From Bob Dylan to Allen Ginsberg, families, Beat poets, rock stars, and Harvard notables. As pictures begin to fade and her retirement looms, Dorfman gives Errol Morris an inside tour of her backyard archive.

In The B-Side: Elsa Dorfman’s Portrait Photography, Errol Morris explores the life of a gifted analog photographer facing a digital present. Dorfman, with whimsical charm and wit, gives her longtime friend a tour of her backyard garage-turned-archive.

The B-Side is a loving portrait of a unique artist too often overlooked in considerations of 20th century photography. It revels in the intimate beauty of Dorfman’s portraits and in her singular appreciation for the ordinary aspects of human life. As photographs begin to fade and Dorfman’s retirement looms, Morris’s film reminds us of a bygone era of analog photography and the extraordinary life of one of its champions.

Leonard-Morgan was similarly influenced by the concept of analog vs. digital.  “The film is about the loss of Elsa’s love/livelihood due to Polaroid no longer making this huge paper that she needs to continue shooting these portraits.  I wanted to similarly show the beauty of analog with the music,” said Leonard-Morgan.  Unlike most music today, “everything was recorded in one take, and never chopped up. I embraced the imperfections, in the same way as Elsa does with her photos. It’s this feeling of rawness that makes this soundtrack really intimate.”

At first the musicians were quite taken aback with this approach.  “Sometimes the ‘glossiness’ of Hollywood soundtracks can take away from the emotion,” Leonard-Morgan described. “I wanted to do something different. Every take on the piano, Rhodes, analog synthesizers, drums, quartet, double bass, guitar were all done in one take. The string players would say things like ‘oh, you can fix that tuning afterwards’ or ‘just one more take.’ It was only after explaining to them that they realized that it was these natural imperfections that I wanted.”

On December 15th, Netflix will release Leonard-Morgan’s next collaboration with Morris, WORMWOOD, which premiered at The Venice Film Festival and received its North American premiere at the Telluride Film Festival earlier this year. WORMWOOD explores the limits of knowledge about the past and the lengths we’ll go in our search for the truth, through the story of one man’s sixty-year quest to identify the circumstances of his father’s mysterious death. Combining a virtuosic performance by Peter Sarsgaard with Morris’ legendary interview style, Wormwood examines this case from every possible angle, bringing the viewer face-to-face with some of the United States’ darkest secrets.

Paul Leonard-Morgan is a BAFTA award winning, Emmy and Ivor Novello nominated composer and producer. His unique cinematic style (fusing orchestra with electronica) has put him in high demand, both as a producer for bands and as a soundtrack composer.  Leonard-Morgan won a BAFTA award for his first film score, PINEAPPLE, and earned both BAFTA and Ivor Novello nominations for his first television drama in the UK, FALLEN. This led to him scoring 6 series of the hit BBC/Kudos drama SPOOKS (MI5 in the USA). His groundbreaking score for LIMITLESS, a paranoia-fuelled action thriller starring Bradley Cooper and Robert De Niro, directed by Neil Burger (The Illusionist), was nominated for the prestigious World Soundtrack Discovery Award in Ghent, after topping the box office in both the US and UK. Leonard-Morgan revisited LIMITLESS as the composer for the CBS TV series based on the film, helmed by Marc Webb (Spiderman, 500 Days of Summer), which earned him his first Emmy nomination.

Leonard-Morgan’s film work also includes DREDD, which would also top the UK box office in its first week of release. Variety magazine noted “the throbbing sounds of Paul Leonard-Morgan’s bass-heavy original score”. The groundbreaking soundtrack is widely recognized as launching a new generation of hybrid scores.  Other scores include 2013’s thriller THE NUMBERS STATION and LEGENDARY, the latter of which opened in over 12000 screens worldwide.  On the animation front, his work included three MINIONS films, released alongside Universal Studio’s all-time highest grossing film DESPICABLE ME 2, and Fox/Evergreen’s $80 million WALKING WITH DINOSAURS 3D.  Leonard-Morgan’s first ever video game soundtrack (EA Games’ flagship $180 million title BATTLEFIELD HARDLINE) was released in 2015, earning top video game sales status in the UK for the first quarter of last year.   In 2017 Leonard-Morgan returned to the gaming realm with the release of Warhammer: Dawn Of War 3.