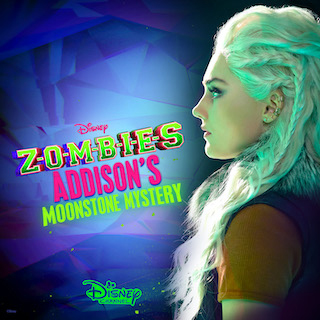 Walt Disney Records releases the digital EP to "Addison's Moonstone Mystery," an eight-episode series of animated shorts featuring beloved characters from the "ZOMBIES" franchise. The series premieres today (7:54 p.m. EDT/PDT) on Disney Channel and in DisneyNOW. " Watch the music video "More Than a Mystery," which introduces the shorts, imagines Addison's journey through a mysterious dreamscape as she searches for her true identity here. Zombies: Addison's Moonstone Mystery digital EP is available here.

Zombies: Addison's Moonstone Mystery features three new songs "More Than A Mystery," "You Do You" and "Feelin the Power." "More Than A Mystery," performed by multi-talented star Meg Donnelly was written by Tova Litvin and Doug Rockwell and produced by Doug Rockwell. The music video was directed by Colton Tran and executive-produced by NappyTabs, with custom animation by Cecilia Fletcher. "You Do You," is an upbeat rap battle, written by Jack Kugell, Hannah Jones and Matt Wong and produced by Jamie Jones, Jack Kugell and Matt Wong. "Feelin' the Power" is an electronic rock anthem, written by Jeannie Lurie and Gabriel Mann and produced by Gabriel Mann and Niv Toar.

"Addison's Moonstone Mystery" is a humorous, fast-paced animated adventure. The story begins at Seabrook High, where zombies, werewolves and humans are all co-existing happily. A new girl at school, Vanna, whom Addison immediately befriends, threatens to shake up the dynamic when they learn that she is not all that she seems.