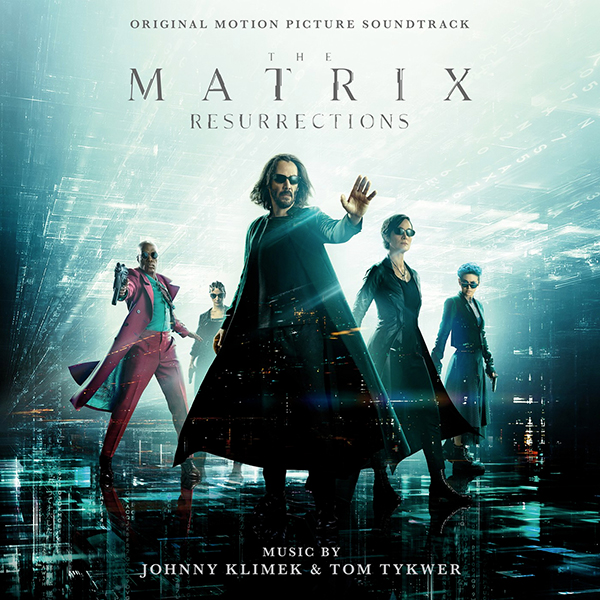 The soundtrack is scheduled to be released on December 17, and the film will be in theaters nationwide and on HBO Max via the Ad-Free plan on December 22, 2021; it will be available on HBO Max for 31 days from theatrical release.

Tom Tykwer discussed the composers’ work on The Matrix Resurrections. “There’s a powerful and distinct musical legacy here. In my opinion, The Matrix Trilogy is one of the great scores of all time. And what’s particularly fantastic about it is that it was also, to my knowledge, one of the first film scores that so implemented electronic music and connected it with progressive late-modern orchestral music. It started a movement, which we are paying tribute to with this music. And yet, this film is playful and emotional with complex development, open in every direction. Johnny and I felt our challenge for the music was to pay tribute to The Matrix lineage and also support this cinematic endeavor of expanding that legacy to explore new direction. That needs to be represented in the music and that is what we are trying to investigate musically.”

Johnny Klimek elaborated, “We spent several months working on material for The Matrix Resurrections, building the main themes, crafting alternative arrangements and electronic variants. We had a lot of fun mixing electronics with classical orchestra. The technology has come so far since I started scoring film.”

The infusion of electronic music into the score ultimately expanded into the inclusion of 11 remixes on the album, and it was an amalgam of inspirations which brought that idea to fruition. Both composers have worked extensively with electronic music, including their work on the celebrated, techno-infused Run Lola Run soundtrack. Further, Lana Wachowski lives in Berlin and is connected to many DJs, remixers, producers and personalities deeply involved with associated with the underground electronic music scene - some of them for more than 30 years -  and the well-known Berlin nightclub Berghain. These connections and inspirations organically evolved from a remix idea into the larger inclusion of remixes on the album.

From visionary filmmaker Lana Wachowski comes The Matrix Resurrections, the long-awaited next chapter in the groundbreaking franchise that redefined a genre. The new film reunites original stars Keanu Reeves and Carrie-Anne Moss in the iconic roles they made famous, Neo and Trinity.

In The Matrix Resurrections, return to a world of two realities: one, everyday life; the other, what lies behind it. To find out if his reality is a physical or mental construct, to truly know himself, Mr. Anderson will have to choose to follow the white rabbit once more. And if Thomas…Neo…has learned anything, it’s that choice, while an illusion, is still the only way out of—or into—the Matrix. Of course, Neo already knows what he has to do. But what he doesn’t yet know is the Matrix is stronger, more secure and more dangerous than ever before.  Déjà vu.

Warner Bros. Pictures Presents, In Association with Village Roadshow Pictures, In Association with Venus Castina Productions, The Matrix Resurrections. The film will be distributed by worldwide by Warner Bros. Pictures. It will be in theaters internationally beginning 16 December 2021 and in the U.S. and on HBO Max via the Ad-Free plan on December 22, 2021; it will be available on HBO Max for 31 days from theatrical release.

TOM TYKWER (born 1965 in Wuppertal) is one of the most influential and renowned contemporary German filmmakers. Since 1990, he writes, directs, produces and composes the scores for his own films and TV shows. In 1985, he moved to Berlin, began studying philosophy at the Free University Berlin and worked as a projectionist in repertory theaters. In 1988, he took over programming of the Berlin arthouse cinema Moviemento and kept his head above waters a script reader for distributors and producing portraits of a variety of film directors for German television. His application attempts at several European film schools were fruitless, so he started writing scripts for short films which he then shot on the lowest budget possible, financing out of his own pocket. Tykwers screenplay for Deadly Maria (1993) then finally collected a minimum financing to actually produce his first feature length film. In 1994 Tykwer co-founded the production company X Filme Creative Pool with producer Stefan Arndt and filmmaking partners Wolfgang Becker and Dani Levy. The company has maintained his producing home until today.

After writing the screenplay for Life Is All You Get (1996) with Wolfgang Becker, Tykwer went on to direct his own second feature, Winter Sleepers (1997). Run Lola Run followed in 1998, scoring X Filme its first great success in Germany and abroad. Despite – or perhaps even because of – its unusual narrative structure, Run Lola Run was the most profitable German film of that year, and has since conquered the hearts of film enthusiasts around the globe. Following the success of Run Lola Run, Tykwer went on to direct The Princess and the Warrior (2000) and the adaptation of a script by Krzysztof Kieslowski, Heaven (2002), which marked Tykwer’s English-language debut. Meanwhile, his company X Filme Creative Pool also embarked on several larger-scale European adventures, among them Wolfgang Becker’s Good bye, Lenin! (2003) and Michael Haneke’s The White Ribbon (2009) and Amour (2012). For his adaptation of Patrick Suskind’s Perfume: The Story of a Murderer (2006), Tykwer joined forces with producer Bernd Eichinger who had been relentlessly hunting down the rights to the book for over a decade.

In 2009 followed Tykwer’s first studio picture, The International, a conspiracy thriller which was a Columbia / Sony Pictures production.  When his comedy-drama THREE (2010) premiered at the Venice Film Festival, it marked the return of Tykwer to filming in German language and on a smaller scale budget. In 2012 Tykwer then collaborated with close friends Lana und Andy Wachowski to create Cloud Atlas, one of the biggest independently financed films ever made, with an all-star cast, among others Tom Hanks.  Tykwer won over Tom Hanks again to star in his adaptation of Dave Egger’s novel A Hologram For The King (2016).

Since 2015, Tykwer has developed the TV show Babylon Berlin, which currently stands at Season 4 and is one of the most successful TV show ever coming out of Germany. It has been sold to more than a hundred territories and was one of the first German TV shows which developed a narrative in the long form concept of an ongoing tale with dozens of chapters. With writing and directing partners Achim von Borries and Henk Handloegten, Tykwer intends to write one more season to finish the saga circling around police detective’s Gereon Rath’s investigations in Weimar Germany of the late 20s. He also directed three episodes of the Wachowski’s TV show Sense 8 (2016-2019) and, with Johnny Klimek, created the score for the 25 episodes which were produced. In 2008, Tykwer and his wife Marie Steinmann co-founded the non-profit organization One Fine Day, which fosters art education and development for young people in Kenya, East Africa. This work has led to the founding of the production company One Fine Day Films, which has been developing feature-length films in workshops since 2009. Among the projects have been Soul Boy (2010, directed by Hawa Essuman), Nairobi Half Life (2012, by David Tosh Gitonga), Something Necessary (2013, Judy Kibinge), Veve (2014, Simon Mukali), Katikati (2015, Mbithi Masya) and Supa Modo (2019, Likarion Wainaina). As a producer, Tykwer has helped realize such films as Absolute Giganten (1999, directed by Sebastian Schipper), Soundless (2004, directed by Mennan Yapo), A Friend of Mine (2006, Sebastian Schipper), and The Heart is a Dark Forest (2007, Nicolette Krebitz). As a composer, Tykwer has written music for all his films . He closely works together with his co-composer Johnny Klimek since 1996. Reinhold Heil was part of the composing team from 1996-2012.

JOHNNY KLIMEK is a fourth generation film composer, equally comfortable in the electronic studio and on the recording stage with Simon Rattle and the Berlin Philharmonic, as he was for Perfume: The Story of a Murderer. This dual-identity asserted itself again in the adaptation of Cloud Atlas (2012), on which Johnny teamed up with the Wachowski’s and his sturdiest collaborator, German auteur Tom Tykwer . His style is a genuine hybrid of the ambient soundscapes and propulsive grooves he mastered during his formative years in the Berlin underground and the classic film scoring tradition so much associated with Hollywood. Both worlds are in evidence in his career-defining work for Tykwer, beginning with the breakthrough hit, Run, Lola, Run, and continuing through Perfume, The International, and Cloud Atlas. These scores, along with much of his output over the last decade, were created in collaboration with his longtime partner, Reinhold Heil. But as of Fall 2011, Johnny, allied with WME composer agent Amos Newman, is breaking out on his own. Currently scoring, MATRIX 4 BABYLON, BERLIN Season 4, KLEO, and LEOPARD SKIN.

Born in Australia, Johnny paid his dues down-under with a series of gritty pub bands, but the genesis of his knife-edged electronics and lush, dreamy sound pictures was his baptism in the Berlin electronica under-ground. Initially migrating to Berlin to form the Eighties pop ensemble, The Other Ones with his siblings, he segued into the club music scene on his own in the Nineties, and out of the latter emerged his creative marriages to both Heil and Tykwer. The consummation of this three-way relationship was Run, Lola, Run, a game-changing exercise in both non-linear storytelling and the use of electronica as underscore. The worldwide success of the Lola score put Johnny on the map and catalyzed his move to Los Angeles and the establishment of his Echo Park studio. Since then, he has seen a steady stream of cinematically striking projects and has become something of a go-to composer for film and television involving parallel realities and slipping time frames. His hybrid style suits this zeitgeist genre well. In addition to his stylistic range, Johnny is a truly international composer at a time when cutting-edge entertainment is going increasingly global. With an Australian background and a musical pedigree earned in Europe, he brings something exciting to the expanding world of Hollywood.

ABOUT WATERTOWER MUSIC
WaterTower Music, the in-house label for the WarnerMedia companies, releases recorded music as rich and diverse as the companies themselves. It has been the soundtrack home to many of the world’s most iconic films, television shows and games since 2001.