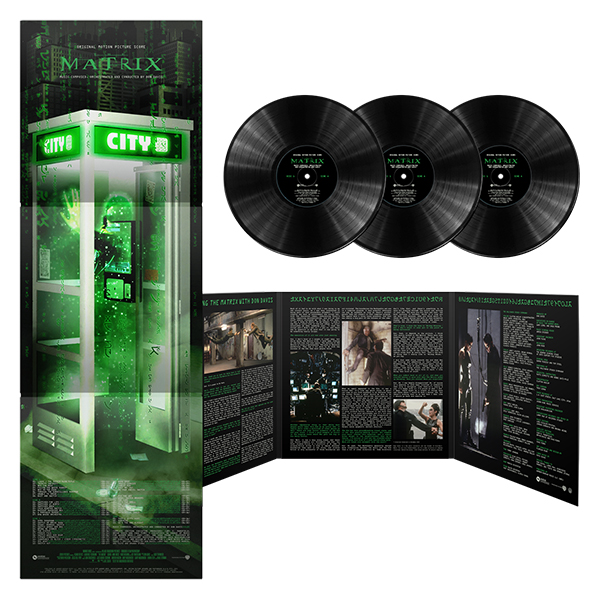 The Matrix: The Complete Edition. Landing in stores on June 3 and available for pre-order today, this handsome, 3-LP collection includes all of the music from the legendary 1999 film, plus an exclusive interview with composer Don Davis, who scored the blockbuster release. The 44-track album is housed in a tri-fold jacket, with stunning new artwork and original film stills.

Also available on CD and SACD exclusively on VareseSarabande.com as well as digital platforms, The Matrix: The Complete Edition delivers Davis’ score (originally released as a 10-track album) in its entirety—from brief, eerie cues like “Follow the Rabbit” and “Through the Surveillance Monitor” to epic, sweeping themes like “Trinity Infinity,” “Nascent Nauseous Neo” and “He’s the One Alright.” Newly remastered audio, meanwhile, allows listeners to fully appreciate the scope and nuance of Davis’ remarkable work.

Long considered to be one of the most influential films of all time, The Matrix ushered in a new era of cinema when it was released in 1999. Directed by the then relatively unknown Wachowski siblings, the Academy Award-winning film depicts a futuristic dystopian society, in which humans live, unknowingly, in a simulated reality. Starring Keanu Reeves, Laurence Fishburne and Carrie-Anne Moss, The Matrix blends philosophical principles, cyberpunk warfare and slick martial arts moves with groundbreaking special effects. Tying together the film’s dazzling visuals and mind-bending plot is Davis’ deftly composed score.

As film music journalist Kaya Savas notes in his 2020 interview with Davis, the score “was unlike anything anyone had heard in an action or science-fiction film to date. Today, that still rings true. Other than its sequels, you won’t find a style and approach to sci-fi/action scoring like The Matrix.” Davis would go on to score the next two films in The Matrix franchise: The Matrix Reloaded and The Matrix Revolutions, both of which were released in 2003. But, of course, it was his initial compositions for The Matrix that started it all—music which AllMusic declared as “the rare score that is nearly as effective as a stand-alone work as it is in the film.”

Davis, who scored the Wachowskis’ first feature film, Bound, spoke to Savas about reading The Matrix’s script for the first time. “I could see … that it was something extraordinary,” he recalled. “Part of the reason I think The Matrix was a success is because [the Wachowskis] were able to hold onto their idea of what it needed to be. And there were things about The Matrix that couldn’t be read in the script, which I would say involved their unique visual sense.”

The Wachowskis’ distinctive vision also applied to the film’s music. “One thing the Wachowskis did want was something new and different. … I took that to heart, and it was clear that a unique approach really was right for that film.” Davis added that the siblings “generally wanted more integration between the music and the film than a lot of other directors do. … [They] wanted the music to outline the action pretty closely at times.”

Drawing inspiration from postmodern composers like Philip Glass, Steve Reich, John Adams, Aaron Kernis and David Lang, Davis quickly realized that the film’s music would need to be a stylistic departure from the grand themes that sci-fi audiences had become accustomed to. “I tried to go in that direction, but I just couldn’t make it work; it just wasn’t right for the picture,” he told Savas. “There was something about the cyberpunk thing, the William Gibson tableau, and the anime stuff that didn’t lend itself at all to a majestic ‘John Williams–esque’ theme.”

As history shows, fans embraced The Matrix—and all of its unprecedented aspects wholeheartedly. Not only would the film rank as one of the highest-grossing theatrical releases ever, but it would also earn numerous accolades, including four Academy Awards, two BAFTAs and two Saturn Awards. Considered to be one of the best science-fiction movies of all time, The Matrix was added to the Library of Congress’ National Film Registry in 2012.

While Davis is not involved in the latest installment of the franchise (2021’s The Matrix Resurrections), he is deeply proud of his work on the film that started it all. “It’s amazing to have been involved in something that hits a zeitgeist like that,” Davis reflects. “It’s really a joy.”

Varèse Sarabande is one of the leading and most prolific producers of film and television soundtracks. The label was formed as a merger between Varèse International Records (named for composer Edgar Varèse) and Sarabande Records (named after a musical dance form). The label’s iconic logo – a frequent curiosity of fans around the globe - is actually an inkblot created by blowing a straw on a piece of paper with India ink.

Initially a classical label, Varèse Sarabande released its first album of film music in June 1978. Since then, Varèse Sarabande has released thousands of soundtracks and new recordings of classic film scores conducted by celebrated composers with the world’s best-known orchestras.

The label upped the ante for fans by creating the Varèse Sarabande CD Club—releasing exclusive limited-edition deluxe soundtracks featuring rare and long-requested titles. The CD Club ran initially from 1989–92 and was restarted in 2001, and Varèse continues to create Deluxe Editions of cherished scores that might otherwise never see a release.