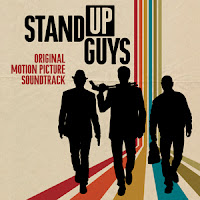 Available: December 4th [Digitally] and in stores on January 8, 2013


Val is released from prison after serving twenty-eight years for refusing to give up one of his close criminal associates. His best friend Doc is there to pick him up, and the two soon re-team with another old pal, Hirsch. Their bond is as strong as ever, and the three reflect on freedom lost and gained, loyalties ebbed and flowed, and days of glory gone by. And despite their age, their capacity for mayhem is still very much alive and well - bullets fly as they make a hilariously valiant effort to compensate for the decades of crime, drugs and sex they've missed. But one of the friends is keeping a dangerous secret- he's been put in an impossible quandary by a former mob boss, and his time to find an acceptable alternative is running out. As the sun rises on the guys' legendary reunion, their position becomes more and more desperate and they finally confront their past once and for all.
5/5 Roll up some classic songs, bring in some great new songs from Jon Bon Jovi... and what do you have? You have soul, swing and sway... that is what I loved about this soundtrack, the cast to film should bring it all home. I also want to say this is Jovi's return to writing/singing on a soundtrack to one of my favorites "Young Guns II" and that blaze of glory... is still there. Great Job!!


http://www.standupguysfilm.com/
Hosted by Unknown at 1:30 AM