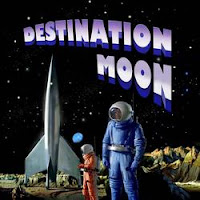 Destination Moon (MMM-1967) is the first complete release of Leith Stevens’ classic 1950 soundtrack.  Simply one of the greatest outer space scores, these original soundtrack recordings have never been released on CD.  The spectacular score totals over 56 minutes, a half-hour more than was released on ten-inch album over 60 years ago!  From the composer’s original acetate recordings, this CD includes every drop of Stevens music, including some that was edited from the movie.  The disc also contains Clarence Wheeler’s fantastic accompaniment written for the Woody Woodpecker cartoon that’s shown in the George Pal motion picture.


5/5 Monster Monday and another great entry from my new favorite classic score label, if you read my past reviews you all ready know my thoughts. This one whisks you space heading you to well I am sure you guessed it the Moon. What to do once you get there? Top Notch Recording!
-Jeremy [Retro-Z]

Classic sci-fi and Woody Woodpecker in one disc! Excellent