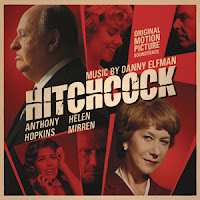 
Director Sacha Gervasi has brought together a brilliant group of actors, including Academy Award winner Anthony Hopkins in the role of Alfred Hitchcock, Academy Award winner Helen Mirren as his wife Alma Reville, Academy Award and Golden Globe nominee Toni Collette as Hitchcock’s assistant Peggy Robertson, and for the actors who took the lead roles in PSYCHO, Scarlett Johansson as Janet Leigh, Jessica Biel as Vera Miles and James D’Arcy as Anthony Perkins. This is the directorial debut in a feature film for the multi-talented screenwriter, journalist and director Gervasi, who is known for his Independent Spirit Award-winning documentary Anvil: The Story of Anvil about the Canadian heavy metal band (The Times: "possibly the greatest film yet made about rock and roll"), and also as the screenwriter of Steven Spielberg’s THE TERMINAL.

5/5 It's artsy... it's Elfman and wrap it up in the twisting of Alfred Hitchcock!
-Jeremy [Retro-Zombie]
Hosted by Unknown at 12:30 AM

Danny Elfman is an amazing musician. Besides Batman his Planet score (using only percussion) is brilliant. A great artist.