Judgehydrogen - Days of the Dead [Interview] 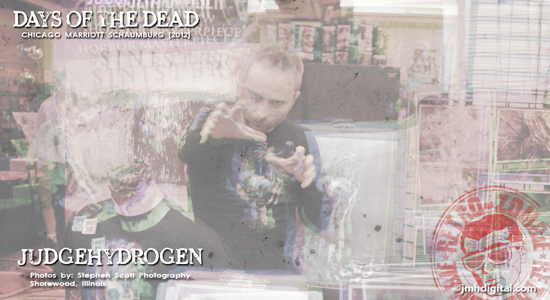 So over the last weekend I was able to go to the "Days of the Dead" convention and meet some cool and interesting people... people you know or should know. I want to thank everyone and introduce a great talent "Judgehydrogen"... and share his story along with great Musick!

I hope to bring you many other great voices from this convention and wanted to thank Judgehydrogen for being the first... thank you!
-Jeremy [Retro-Zombie] 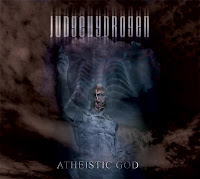 -Tell us about yourself and your current project?
Judgehydrogen: First of all, I would like to thank Howlin’ Wolf Records for this interview. I am very pleased to answer your questions. My musick is inspired by apocalyptic myths, industrialization, and technology. We are in contention with ourselves. How is survival possible when we embrace outdated cosmologies and posses powerful weaponry that could easily decimate the earth? If we are to survive we must cast away religion and embrace our “true nature.” Once this is done, our use of technologies will not be driven by religious deceptions. We have one Earth and that is all. These concepts are the inspirations of my visual art as well. So far I have released three albums: “Atheistic God,” “Cult of Blood,” and “Revolutionary Suicide.” “A Body of Water” is from my first album “Atheistic God.”

Currently, I am working on a series of albums. I have always been greatly inspired by Coil’s “Musick to Play in The Dark” Vol 1 & 2 and their “Unnatural Histories” series. I will be releasing the title of the series soon. The musick on these works are dark ambient, neo-classical, industrial, and un-categorizable. I have enough work to fill about 5 albums.

-How did your track "A Body Of Water" become included in the film "Sinister" and how did that feel from phone call to seeing it used in the film?
Judgehydrogen: Another excellent question my friend. Initially, one of Scott Derrickson’s (the director of the film) agents contacted me through MySpace of all places. I rarely go on there. I have about 5,000 spam messages and it is very difficult to operate. So obviously, I didn’t receive the message. Eventually Scott Derrickson (The Exorcism of Emily Rose, Hellraiser Inferno) himself emailed me directly. After that it was very simple. He described the “pool party “scene where my song “A Body of Water” would appear in the new film “Sinister” starring Ethan Hawke and I was very interested. Derrickson also used “A Body of Water” extensively in the red-band trailer which was very exciting as well. I was very nervous up to the release of the film because I could not believe my musick could be in such a huge production.

-How was your experience at "Days Of The Dead", did you get to meet a celebrity that you looked forward to seeing at the convention.
Judgehydrogen: “Days of the Dead” was an excellent convention. The fans and staff are unequaled. I sold out of most of my albums and sold many of my artworks. I must remember that Chicago is a musick city and I should bring more of my albums especially since the release of “Sinister.” I did get to see Tony Todd. He is in two of my favorite films: “The Thing” and “Requiem for a Dream.”

-What is next?
Judgehydrogen: I have many projects and announcements for 2013. I plan to attend many horror conventions as an artist, release new musick and art, and have musick in more films. You will have to watch and see my friends. Soon you will see what my eyes have seen.

love the part about his inspiration