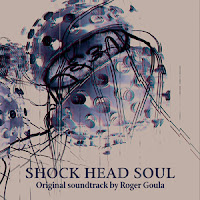 The film explores the writings of Daniel Paul Schreber, a lawyer who claimed that he received messages from God via a ‘writing down machine’. Goula’s superb score was performed by the Raven quartet and is both an avant-garde piece of work as well as a soundtrack that follows the narrative of the film. Pieces relate to such idioms as a-atonalism and French avant-garde minimalism as well as late romanticism. Instrumental colors in addition to the string quartet include the early electronic instrument, the ondes martenot, and piano.
5/5 Kind of freaky... though very cool, so for me it was freaky cool. The cover art is amazing... it pulled me in... you need to hear it!!
-Jeremy [Retro-Zombie]
Hosted by Unknown at 1:00 AM

Very unique story! And yeah, the cover art is cool.