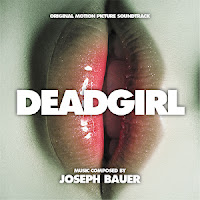 
Released world-wide in theatres and on DVD in 2009, Marcel Sarmiento’s Deadgirl tells the story about two high school boys who discover an imprisoned woman who cannot die. The novel plot receives an inspired musical treatment courtesy of Joseph Bauer, a talented film composer who has penned several impressive low budget horror scores for titles such as Brutal and Blackwater Valley Exorcism, as well as the current holiday comedy Elf-Man. Bauer always brings a sense of sophistication to the films he scores: an example in the score for Deadgirl are the fine themes and unexpected melodic elements, such as the brief but charming ‘Makeover Waltz’.

5/5 Starting with a hint of innocence, then the change up to a very decent horror score... while maintaining it's innocent theme. This turning out to be a score that will lead us into the new year checking over our shoulders, okay look!
-Jeremy [Retro-Z]
Hosted by Unknown at 12:03 PM