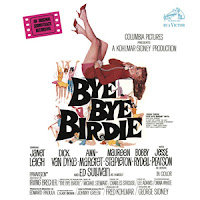 
Masterworks Broadway will release a newly remastered version of Bye Bye Birdie – The Original Motion Picture Soundtrack, in conjunction with the film’s 50th anniversary. Bye Bye Birdie opens a new chapter in the label’s celebrated campaign to preserve the music of Broadway by entering the arena of film musical soundtracks. This new reissue of Bye Bye Birdie will include three bonus tracks and will be available on CD and via digital download January 8, 2013.

Fifty years later, Bye Bye Birdie continues to charm and entertain, and its songs by Charles Strouse (Annie, Applause) and Lee Adams have lost none of their appeal and vivacity. The soundtrack, featuring the well-known songs such as “Put On a Happy Face,” “One Last Kiss” and “Bye Bye Birdie,” has been remastered from the original tapes and includes three bonus tracks of studio recordings from the film’s stars, Ann-Margaret and Jesse Pearson.

5/5 Yeah, I know... what is this doing here? I like musicals... yeah I know! On my father's side of the family he was like fifth cousin to Ann-Margaret... we never met and she probably doesn't know, but it is something he always told me. Also wanted to welcome our new sponsor "Masterworks Broadway", there will be many more classics and current.. dare I say "musicals"... why yes... yes I can!
-Jeremy [Retro-Z]

I'm so happy we no longer have hairdos like those...