HUGEsound Records Presents: "THE LORD OF THE RINGS ONLINE 10th Anniversary Commemorative" Soundtrack, Featuring Original Music By Chance Thomas... The Other Lord of the Rings Composer 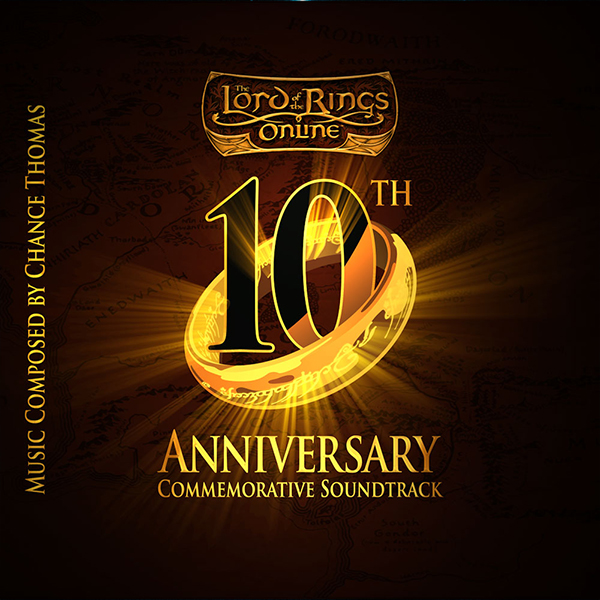 HUGEsound Records will release THE LORD OF THE RINGS ONLINE 10th Anniversary Commemorative original video game soundtrack through all major digital music outlets worldwide on June 23rd.  The album features the game’s original score by Chance Thomas, an avid lifelong fan of The Lord of the Rings. This 26-song double album features Thomas’ very best work over the past 10 years – music so emotionally nuanced it’s as if it sprang forth from the pages of LotR itself.

“Seeing this collection of music released to the world is like watching a dream come true,” states Thomas. “Who could have imagined such a thing, when I was growing up an obscure and geeky kid in Oklahoma? Each track is performed by classically trained musicians, pouring their passion into fine acoustic instruments. All so skilled, so talented, and so engaged. It is beyond belief to me.”

THE LORD OF THE RINGS ONLINE has been transporting Tolkien fans to Middle-earth for 10 years, and with that comes the release of this incredible collection of music. Much like the beloved books this extraordinary world is based upon, the music Thomas creates has an immersive, fantastic quality that truly is a perfect companion for anyone who enjoys the world created by J.R.R. Tolkien.

Chance Thomas began writing music for The Lord of the Rings well before Howard Shore tackled the soundtrack for Jackson’s trilogy. He has already contributed to 9 games and expansions spanning a 20-year period, and just started work on a 10th expansion. All of this music – orchestral, choral, and acoustic ensemble music – is completely original and is all based on personal research conducted into the literature by Chance Thomas himself.

When he first began composing music based on The Lord of the Rings, Chance spent months intensely researching the books – eventually running into years – pulling out everything professor Tolkien wrote about music, song, voices, instruments, even the effect that music had on people and environments. He collected these references, sorted through them, organized and then distilled all of his research into a 26-page document which he called The Tolkien Music Style Guide.

For each of the 5 key races in Middle-earth, his Style Guide lists specific instrumental palettes, vocal ranges, stylistic guidelines, even home keys – all based on references and inferences drawn directly from the text.
About Chance Thomas: Chance Thomas is an American composer, best known for his award-winning original music scores for blockbuster videos games.  He also composes for film, animation, television and virtual reality.

Chance has been entrusted with prestigious titles and high-value entertainment properties throughout his career – The Lord of the Rings, Marvel, Avatar, Dungeons & Dragons, King Kong and many more.  He has a knack for unraveling the unique DNA of each IP, conveyed in music that is both original and unmistakably resonant of each.  That ability continues to win the trust of stake holders and delight fans worldwide.

The Lord of the Rings Online may be Chance's most widely admired work.  Each of his compositions is based on years of personal research into the literature - painstakingly crafting instrumental palettes, vocal ranges, stylistic tendencies and emotional conjuring based on direct references and inferences scattered throughout the text. According to Game Developer Magazine, the result is a score, "...drawn from the very pen of Tolkien's writings, ringing of truth to anyone familiar with its pages."

His movie and TV scores include an Oscar™ winning film (The ChubbChubbs), an Emmy™ winning PSA (Rise Above the Blues), Emmy™ nominated TV movie (Lost Treasure Hunt) and music for popular shows like The Bachelorette, Pawn Stars, The Daily Show and America's Most Wanted.

In the late 1990's Chance led a successful movement which brought game music into the Grammy Awards™ for the first time.  He helped found the Game Audio Network Guild and is a former Chair of the Music and Sound Peer Committees for the Academy of Interactive Arts and Sciences.   [CHANCE THOMAS: HOME PAGE]

As I listen I find myself drawn into a magical world, with epic Lord of the Rings feel... but manages to create it's own style. It's a worthy score to the game and the world, you should play the on-line game and immerse yourself into the score... nice job Chance Thomas!
Jeremy [Six Strings]
Hosted by Jeremy [Retro] at 4:02 PM