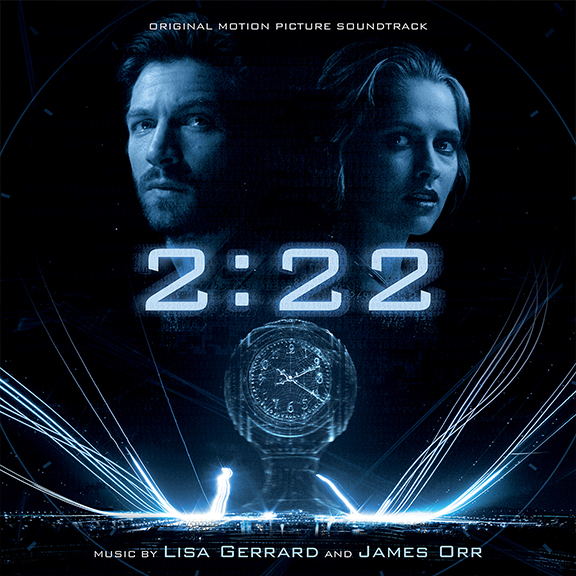 Varèse Sarabande will release the 2:22 – Original Motion Picture Soundtrack digitally on June 30 and CD later this year. The album features the original music composed by Lisa Gerrard (JANE GOT A GUN, GLADIATOR) and James Orr (additional music JANE GOT A GUN, BALIBO).

“The director was very sensitive to sound and tone,” described Gerrard.  “There was scope in the score for a main theme for the two principal characters, Dylan and Sarah. This is played briefly at the beginning of the film with piano, and then resurfaces throughout in various different guises, culminating in the orchestra in the finale.”

“The theme itself was one element, but the nature of the sound that produced it was very important to him. It needed to fit in with the idea of it being something contemporary and fresh,” Orr added.  “We experimented a lot with recording both organic and synthetic sounds - voice, piano, guitar, strings - but manipulating them in a way that twisted them more to an electronic feel. The voice was key throughout, but it's often used in a way that morphs the sound into something else, and is often a textural component and not a lead.”

New York City air traffic controller Dylan Branson (Michiel Huisman) is the embodiment of a guy at the top of his game, until one day at 2:22pm, a blinding flash of light paralyzes him for a few crucial seconds as two passenger planes barely avoid a midair collision. Suspended from his job, Dylan begins to notice the increasingly ominous repetition of sounds and events in his life that happen at exactly the same time every day. An underlying pattern builds, mysteriously drawing him into Grand Central Station every day 2:22pm. As he’s drawn into a complex relationship with a beautiful woman who works in an art gallery, Sarah (Teresa Palmer), disturbingly complicated by her ex-boyfriend Jonas (Sam Reid), Dylan must break the power of the past, and take control of time itself.

“Time and memory are two very important themes in the film, and the characters are in a constant state of uncertainty and unpredictability about future events,” Gerrard concluded.