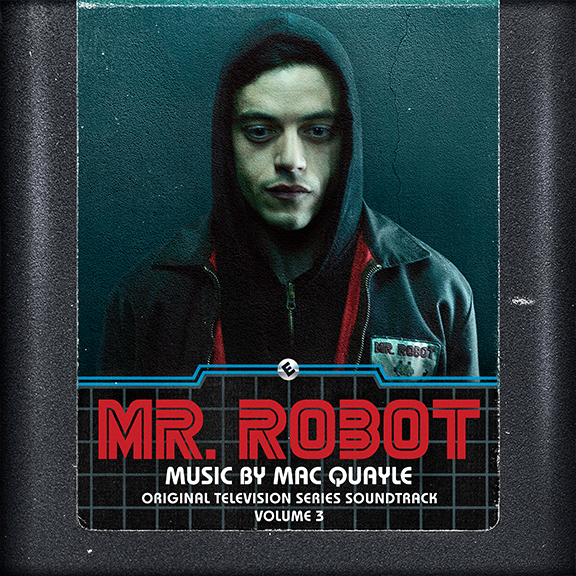 Lakeshore Records will release the first of two volumes of music from the second season of the EMMY®, Golden Globe®, and Peabody Award-Winning USA Network series MR. ROBOT.   MR. ROBOT V.3 will be digitally released on June 9, while the V.3 CD and the second volume, MR. ROBOT V.4, both digital and CD, are set to release later this summer.  Volumes 3&4 feature the original score by composer Mac Quayle (FEUD: BETTE AND JOAN, AMERICAN HORROR STORY), who won the Emmy for his music in MR. ROBOT Season 1.  Later this year, Invada Records, in partnership with Lakeshore Records, will release a special LP package.

"If the first season of MR. ROBOT took us into Elliot’s mind, the second season drew us deeper into his subconscious.” Said Composer Mac Quayle. “As we learned, it’s pretty dark in there and so naturally the music followed suit. Darker, weirder, more dissonant, more paranoid.”

From Universal Cable Productions, MR. ROBOT follows Elliot (Rami Malek), a young programmer who works as a cyber-security engineer by day and as a vigilante hacker by night.  Elliot finds himself at a crossroads when the mysterious leader (Christian Slater) of an underground hacker group recruits him to destroy the firm he is paid to protect.  Compelled by his personal beliefs, Elliot struggles to resist the chance to take down the multinational CEOs he believes are running (and ruining) the world.  The series also stars Portia Doubleday, Carly Chaikin and Martin Wallström. Season 2 picks up 30 days after the now infamous fsociety 5/9 hack on multi-national company Evil Corp and explored the consequences of that attack as well as the illusion of control.  Season 3 will premiere in October 2017.

“It’s quite possibly some of the strangest music I’ve ever written,” said Quayle. “I brought Elliot’s theme back from season one but in a much more subtle and obscure form. In addition, I expanded the electronic instrument palette with the use of orchestral style strings to add another layer of emotion to certain scenes.”

In addition to Mac’s television work, he has also composed music for a diverse list of feature films and documentaries.  Mac’s music as an additional composer for Cliff Martinez can be heard in HBO’s EMMY winning THE NORMAL HEART, Film District’s Critic’s Choice Award winning DRIVE, Warner Bros.’ CONTAGION and A24’s SPRING BREAKERS.

As a producer, re-mixer and keyboardist, Mac has worked on over 300 releases, 40 #1 Billboard Dance hits, and earned a GRAMMY nomination for producing Donna Summer’s “I Will Go with You.”  Quayle has been awarded numerous Gold and Platinum records, as well as worked with some of the biggest names in the music business.  Mac has created music for Madonna, Whitney Houston, Depeche Mode, Britney Spears, Elvis Presley, Annie Lennox, New Order, Beyonce and Sting, to name a few.

“To round out the sound I created some beat-driven electro tracks that had me jumping around the studio during the composing process,” concluded Quayle. “Once it was all done, it became clear to me that the Mr. Robot rabbit hole goes way deeper than I ever imagined.”