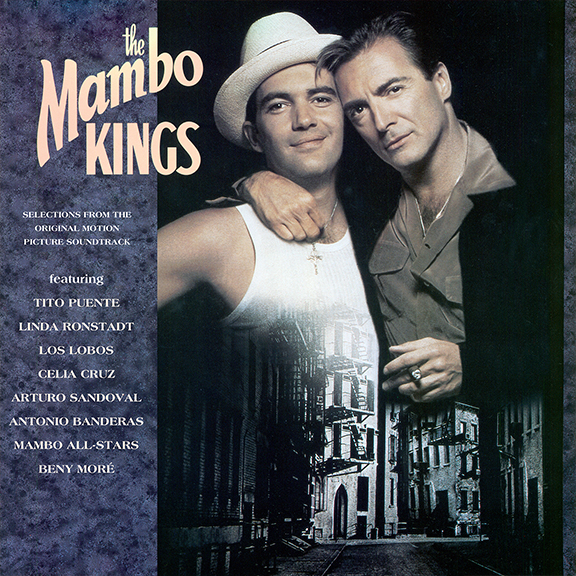 Varèse Sarabande will release THE MAMBO KINGS – Selections From The Original Motion Picture Soundtrack on CD June, 30 2017. The soundtrack from the 1992 film, which re-introduced Cuban and Latin salsa music to mainstream audiences, has been completely re-mastered.  The soundtrack features songs such as “Cuban Pete” by Tito Puente, “Mambo Caliente” by Arturo Sandoval and “Beautiful Maria Of my Soul” by Los Lobos.

In the 1992 film THE MAMBO KINGS, Antonio Banderas (Philadelphia, Interview with the Vampire) makes his American film debut co-starring with Armand Assante (Private Benjamin) in this romantic, music-filled epic of two Cuban brothers who come to New York City during the mambo craze of the 1950s. Factory workers by day, by night they are passionate musicians, filling the dance clubs with their songs of love as they desperately pursue their big break.

With Academy Award-nominee Cathy Moriarty (Raging Bull) and Desi Arnaz, Jr., who appears as his bandleader father when the brothers guest on I Love Lucy. Based on the Pulitzer Prize-winning novel, and featuring the classic Cuban dance music enjoying a renewed popularity in the U.S., including legendary THE MAMBO KINGS was based on Oscar Hijuelos’ Pulitzer Prize-winning novel The Mambo Kings Play Songs Of Love.  “The spirit of the book is very improvisatory,” Hijuelos said in Premiere Magazine.  “It’s about hearing a melody and jamming, and that’s what [director] Arne Glimcher has done with the movie.”

The Mambo Kings
Selections From The Original Motion Picture Soundtrack

Varèse Sarabande will release a CD of THE MAMBO KINGS – Selections From The Original Motion Picture Soundtrack on June 30, 2017.