VARÈSE SARABANDE: "THE BIG SICK" Featuring Original Score by Michael Andrews And The Song “My Love” by The Bird and The Bee 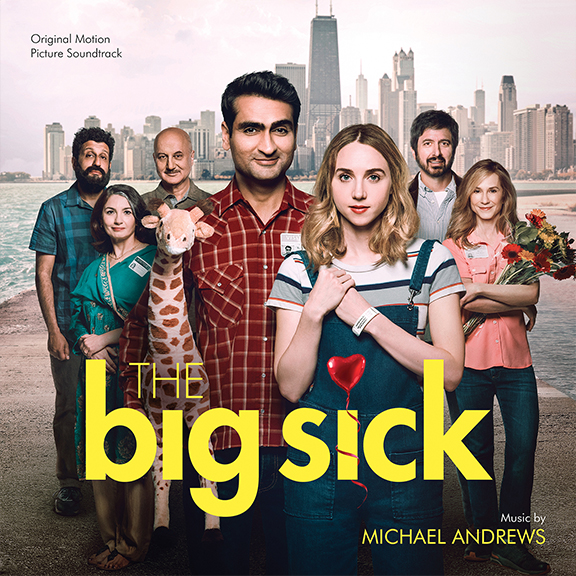 Varèse Sarabande will release THE BIG SICK – Original Motion Picture Soundtrack on June 23, 2017 digitally and on CD. The album features original music composed by Michael Andrews (Bridesmaids, Donnie Darko).  The soundtrack also includes the end title track “My Love” by The Bird and The Bee.

“[Director] Michael Showalter talked mainly about the thematic division in the film – it starts as a traditional romantic comedy and then there is a sharp departure into a drama after Emily’s sickness,” said Andrews. “He wanted a specific marker through a sharp musical departure starting after Kumail becomes aware that Emily has become sick.”

The SXSW Festival award winning film based on the real-life courtship between Kumail Nanjiani and Emily V. Gordon, THE BIG SICK tells the story of Pakistan-born aspiring comedian Kumail (Nanjiani), who connects with grad student Emily (Zoe Kazan) after one of his standup sets. However, what they thought would be just a one-night stand blossoms into the real thing, which complicates the life that is expected of Kumail by his traditional Muslim parents.

When Emily is beset with a mystery illness, it forces Kumail to navigate the medical crisis with her parents, Beth and Terry (Holly Hunter and Ray Romano) who he's never met, while dealing with the emotional tug-of-war between his family and his heart. THE BIG SICK is directed by Michael Showalter (HELLO MY NAME IS DORIS) and produced by Judd Apatow (TRAINWRECK, THIS IS 40) and Barry Mendel (TRAINWRECK, THE ROYAL TENENBAUMS).

Film composer, musician, and producer Michael Andrews began his professional music career in the early '90s as a recording artist. By the late 90’s Andrews was contributing music to the Judd Apatow and Paul Feig-created cult comedy Freaks & Geeks. In 2000 he would compose and perform the score for the sci-fi drama Donnie Darko. The soundtrack also featured Andrews' subtle rendering of Tears for Fears' "Mad World," featuring vocalist Gary Jules. The track would go on to become an international hit and stylistic touchstone.

He continues to work in television and film, collaborating with independent filmmakers including Miranda July (Me and You and Everyone We Know), The Duplass Brothers (Cyrus, Jeff Who Lives At Home, Togetherness) as well as mainstream comedy directors such as Paul Feig (Bridesmaids, The Heat), Nick Stoller (Neighbors, Neighbors 2: SORORITY RISING, 5 Year Engagement, Friends From College), Jake Kasdan, Judd Apatow and Sean Anders (Daddy’s Home, Daddy’s Home 2). As a performer, Andrews releases records under his own name including Hand on a String (2006) and Spilling A Rainbow (2012). He also continues to record and perform with the jazz-funk outfit Greyboy Allstars.