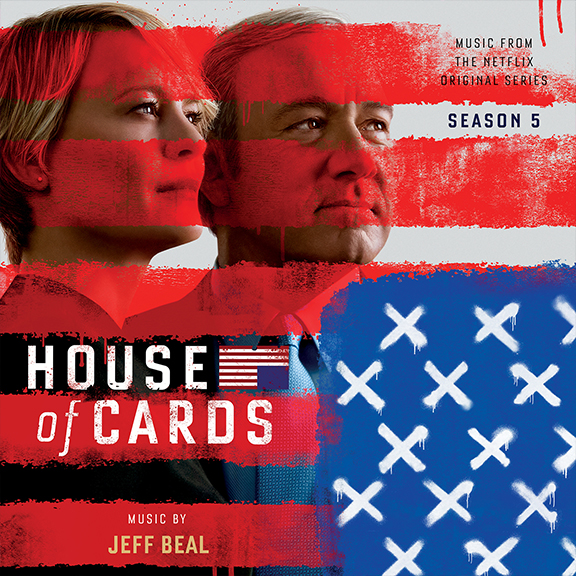 “I love secrets in stories, and we have some great ones in season five,” said Beal.  “Tracks like ‘Infamy’, 'A Note From Tom’, ‘Saved My Life, and ‘Don’t Go Their Way’ all explore the territory of secrets in musical terms. These pieces feel a bit like musical riddles or puzzles.”

“I wanted to see what new musical shapes I could play around with this fifth season - turn upside-down the usual compositional structures,” Beal explained. “A good example of this is the opening track, ‘Nothing To Be Afraid Of’. Here the electric bass, which usually plays two repeated notes, plays an extended melody, while the strings incessantly play the repeated “bass” part. I also experimented with moving the ‘low’ bass ostinatos into higher registers, such as in tracks such as ‘Almost There’, ‘Simple Truths’ and ‘No Good Deed.’ These shapes created for a sense of upside down gravity, like the power is shifting perhaps?”

Just as Claire Underwood takes her place in the limelight in season 5, Jeff was given the opportunity to showcase a strong female voice, his wife soprano Joan Beal, a bit more this season. “‘Dial Up The Terror’, ‘Implicate Yourself’, and ‘Nuclear Codes’ all explore the arc of Claire Underwood in season five. The operatic soprano is the musical voice of female power and strength.”

It’s no coincidence that Jeff Beal’s film music career began to take off with his work on the acclaimed film POLLOCK (2000). Beal writes, orchestrates, conducts, mixes and often performs on his own scores – no other artist’s brushstrokes touch his canvas. As an accomplished jazz musician, Beal uses his improvisation skills to read the emotional tone of a scene and compose music on the spot. “This process allows me to set up a world where anything can happen, but you don’t see it coming.”

A four-time EMMY® winner, Beal’s approach is a favorite for more sophisticated works.  His TV credits include HBO’s ROME, CARNIVÀLE, and the Netflix series HOUSE OF CARDS. His documentary work includes BLACKFISH, WEINER, THE QUEEN OF VERSAILLES, the Oliver Stone four-night documentary event THE PUTIN INTERVIEWS, AN INCONVENIENT SEQUEL: TRUTH TO POWER, which premiered at Sundance and will be in theaters in July, and BOSTON the recently released documentary about the history of the Boston Marathon.  Jeff’s upcoming film projects include SHOCK AND AWE (directed by Rob Reiner).