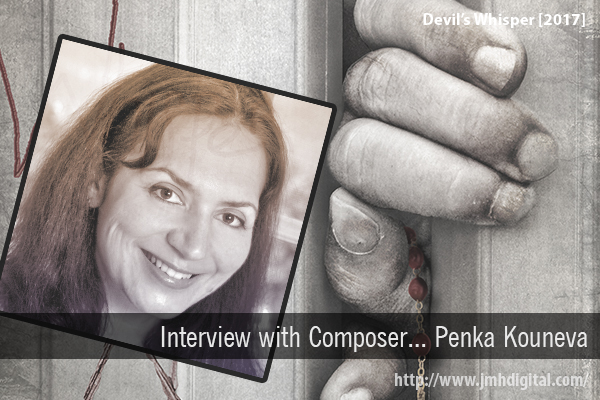 Jeremy [Six Strings]: Please tell us more about the film "DEVIL'S WHISPER", how did you become involved and how you approached this project musically?

Penka Kouneva: Devil's Whisper is a psychological thriller about the 15-year old Alex who comes from a religious family and aspires to become a Catholic priest. One day he discovers a mysterious box, opens it and unleashes a demon bent on destroying him. On the surface Devil's Whisper is a supernatural horror film about demonic possession, but at its core it's a tale about repressed memories, childhood trauma and the cycle of abuse that affects so many children. I was recommended by two dear friends, Joe Kraemer and Mark Lanza. I have genuine passion for horror, fantasy, supernatural and SciFi stories and am naturally drawn and energized by these stories. Devil's Whisper  is a richly layered and beautifully produced story. It's blood-curdling when it needs to be, and riveting from the first frame to the last. The film tackles subjects like faith and religiosity, coming-of-age and adolescent characters in a tasteful and compassionate manner. I approached the project like a modern supernatural tale, with a subtle, mostly non-traditional score in the vein of The Conjuring. The main ingredients of the score are low pulsing throbbing synths, textural effects and a mournful motif for Alex's angst. Like most horror scores, the music needs to balance between the human drama (with more traditional, heart-felt thematic motifs) and the demonic forces (with scary and explosive synths and sound design textures).

Jeremy [Six Strings]: Did you get a certain level of musical freedoms for the film "DEVIL'S WHISPER" or did the director Adam Ripp have a specific direction?

Penka Kouneva: Adam Ripp was fantastic to work with. He presented to me an inspiring and cogent artistic vision - his completed film. He gave me clear directions on the ethos of the score and the palette he thought would be fitting. Prior to meeting him, I had been doing a lot of heavy orchestral scores on my recent games and CDs, so I jumped instantly at the opportunity to compose a non-orchestral, non-traditional score. Adam was the perfect collaborator and I so much enjoyed working with him. I also brought in my co-composing partner of 10 years, Christopher Lord because of his mastery with complicated synths and orchestral design. Chris made a great contribution to the demonic palette. 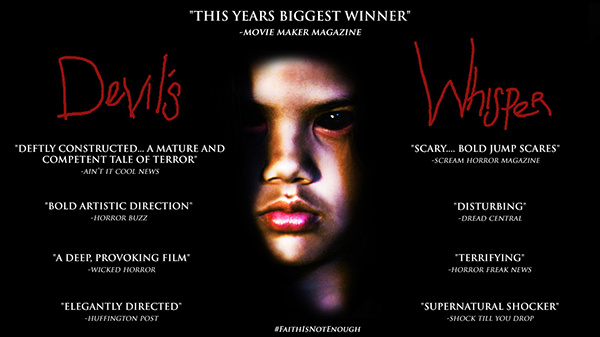 Jeremy [Six Strings]: With the film "DEVIL'S WHISPER", what do you hope the audience will take away from your music and will we see a physical/digital release?

Penka Kouneva: Devil's Whisper is a terrific genre film that leaves people with deep emotional experience and also with food for thought. The music is both emotional and very scary. My role is to support the storytelling and to create that emotional backdrop that will make the film a visceral and unforgettable experience. The DVD hit the stores October 3rd !! The digital release of the soundtrack is planned for November when the film becomes available on VOD. Check it out!

Jeremy [Six Strings]: Since we last talked you have found a world of composing success with your personal releases "The Woman Astronaut" [VS] and "A Warrior’s Odyssey" [HWR]... how do you feel about those releases and what they meant to you to have them in the world?

Penka Kouneva: My passion projects are the best, most personal music I've composed and I am grateful that I created them. The Woman Astronaut brought me a scoring job for the American Astronauts - a new $30M NASA exhibit titled "Heroes and Legends" permanently located at the Kennedy Space Center in Florida. I have a new orchestral CD coming out in November on Varese Sarabande titled Rebirth of Id.

Jeremy [Six Strings]: Share some of the work you have done, who are some that you have worked with and something that you took away from those or felt inspired?

Penka Kouneva: This year I scored The Mummy: Prodigium Strike Virtual Reality game. It was a fun project battling zombies and providing the music signature for the Special forces. I'm super-excited about the possibilities of VR for storytelling, gaming, and beyond entertainment. What inspires me most is opportunities to create innovative scores where I combine various elements in a novel and fresh way. Devil's Whisper was most definitely such an opportunity. While I still am passionate about game scoring and have a few games out there (Cookie Jam 2, Chime Sharp, Chobolabs' Mayhem), I am also pleased that 2017 has brought me 3 more feature films to score - Paul Salamoff's Sci-Fi thriller Encounter, and two other drama features in progress. 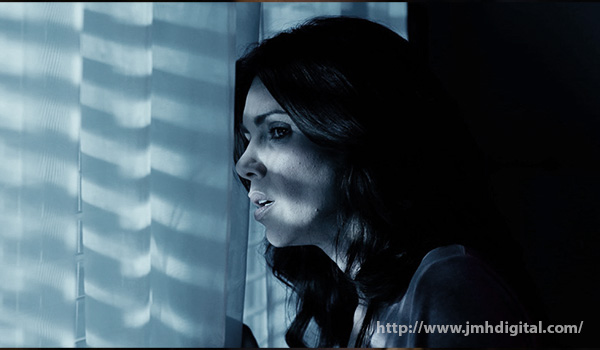 Jeremy [Six Strings]: Outside of your talented writer/actor/producer/husband Daniel Schweiger [respect], where do you find your inspiration that sets you apart and different than other composers? Is there a certain music appreciation among other composers, I can imagine you interact with composers daily.

Penka Kouneva: Yes, Daniel still plays one soundtrack every morning, which is very inspiring and informative for me. 14 years together - that's over 5,000 soundtracks that he's played in the house. These days I'm most inspired by storytelling - stories about heroes, villains, women's experiences, history, fantasy, space, science fiction, horror. Currently I'm reading See Through My Eyes, a collection of ghost stories; a story by my dear friend Victor Rodriguez published in it inspired my new orchestral album Rebirth of Id. The game that most inspired me this year is Horizon Zero Dawn. I still listen to a lot of music but these days I'm composing more and focusing on telling my own stories and writing my own music (passion projects), in addition to all jobs that are always going on. Musically, I am most inspired by the phenomenal talent and mastery of a fellow game &amp; film composer, Neal Acree. I have the honor of orchestrating his music for all Blizzard video games.

Jeremy [Six Strings]: If you could spread one message to a new composer, what might that be?

Penka Kouneva:
01. Write fantastic music. Write music that inspires people so much that they would be dying to collaborate with you.
02. Learn, learn, learn, compose, compose, compose … the craft of music is a deepest ocean of possibilities …. being fluent in your composing skills is paramount.
03. Be a caring human being, and cultivate circles of creative communities around you, because your circles of friends and champions will bring the most inspiring scoring jobs to you. OK, three messages.

Jeremy [Six Strings]: What can you share with us outside the film "DEVIL'S WHISPER" upcoming projects or something you would like to mention?

Penka Kouneva: Yes, three upcoming features - Encounter, Blue, the 3rd one is NDA and also one NDA video game. I am a freelance composer and always on the lookout for new collaborators and new opportunities.

Penka Kouneva: I wish all my readers a happy and fruitful Fall season and much success! I am grateful and humbled by the love and support of my fans - you make all our work meaningful and real. Enjoy Devil's Whisper!

Penka Kouneva is known across Hollywood as an exceptionally talented composer and artist of uncommon passion. Her credits include the games Prince of Persia and Transformers (with themes by Steve Jablonsky). She has scored on her own a dozen indie features: Chloe Moretz's Third Nail and Josh Duhamel's Dorian Gray; the supernatural horror feature Devil's Whisper on Sony Pictures Home Entertainment, and Paul Salamoff's SciFi drama film Encounter. She has also scored games and The Mummy VR experience. Recently Penka scored a $30M NASA exhibit Heroes and Legends  at the Kennedy Space Center celebrating the American astronauts. Varese Sarabande released her orchestral CD The Woman Astronaut and Howlin' Wolf Records released her A Warrior's Odyssey CD. In addition to her career as a composer, she has also worked as an orchestrator/arranger on some of the biggest films (Matrix, Transformers, Pirates 3, Elysium, Ender's Game, Ninja Turtles) and games (Gears of War, Sims, Overwatch, World of Warcraft, StarCraft II, Diablo 3). Penka was born and raised in Bulgaria and currently lives in Los Angeles with her music editor husband and 11-year old daughter.
-----------------------------
-------------------------
Hosted by Jeremy [Retro] at 11:30 PM

Penka Kouneva is my favorite composer.She always composes high level films and songs.I am so happy to know more about herself through your conducted interview.