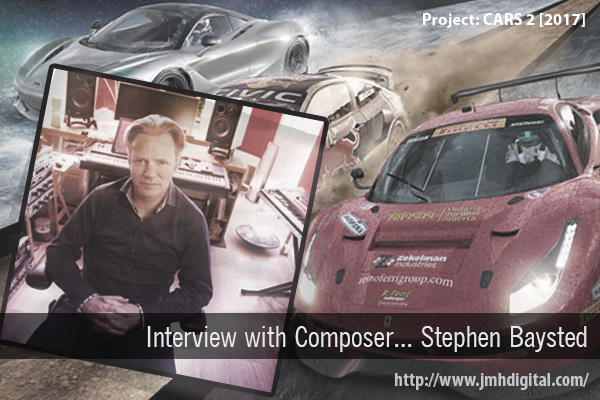 Jeremy [Six Strings]: How did you come to work on the "PROJECT CARS" game soundtrack and how much creative freedom did you have on the latest "PROJECT CARS 2" compared to the previous one?

Stephen Baysted: I’ve been fortunate enough to have composed the music for all Slightly Mad Studios’ games stretching right back to their first game release in 2004. I had a great deal of creative freedom for Project Cars 2. However, as composer and audio director for the series, my role is always to serve the needs of the game.

Jeremy [Six Strings]: When creating music like "PROJECT CARS 2", where did you find your inspiration or do you find you have a ritual?

Stephen Baysted: Good question! Inspiration comes from many sources: deadlines, walking in the countryside, being by the ocean. There’s no ritual as such, but I begin each project by doing research on the subject matter and I find that it helps to get things kick-started.

Jeremy [Six Strings]: Congratulations on your nomination from the "Golden Joystick Awards" for "PROJECT CARS 2" for all your hard work in creating a great score like this... how is this different from a film "nod" to a game "nod" of appreciation?

Stephen Baysted: Thank you very much! It’s always an honour to be recognized for hard work, especially when you’ve been working on a project for such a long time. I think nowadays they are quite similar, although what makes the Golden Joystick Awards so special is the fact that they are voted by the audience.

Jeremy [Six Strings]: Your career has many different levels from game, television series and film... where do you find is the most rewarding or could you please share one of your favourite of each?

Stephen Baysted: This is a difficult question. To be honest I really enjoy the variety of projects, working with new people and collaborating on new ventures. Each is a very different medium to work in and I’m not sure I have a favourite!

Jeremy [Six Strings]: Can you share some upcoming projects?

Stephen Baysted: Work has already begun on my next game project due for release in 2019. It’s a major Hollywood film franchise tie-in but I can’t say too much more about it at this stage! I’m also working on various TV series at the moment, one of which is with Michelin starred chef Tom Kerridge and the BBC.
THANK YOU...

Project CARS 2 is nominated for Best Audio [Click Here] in the 25th Golden Joystick Awards (VOTE HERE) and the original soundtrack is out now on Spotify and iTunes.

Renowned for his versatility, emotionally charged and expressively powerful music, Stephen Baysted's acclaimed music scores have been enjoyed by audiences worldwide in a succession of award-winning films and video games including the best-selling racing series Project CARS, EA's Need for Speed series and Phil Grabsky's 'Exhibition On Screen' series of films bringing blockbuster art exhibitions from galleries around the world to the cinema, in stunning high definition. Baysted is an in-demand film and television composer whose credits include two seasons of Blink Film's epic documentary series "Ancient Mysteries" for Channel 5, Blink's "Volatile Earth" for Channel 4 and Nova, and "Graveyard of the Giant Beasts" for Channel 4 and PBS. Earlier this year, Baysted also reunited with award-winning filmmaker Phil Grabsky and Seventh Art Productions to score "I, Claude Monet," a new documentary feature in the acclaimed 'Exhibition On Screen' series. Their previous collaborations include "Renoir: Reviled and Revered," "The Impressionists - And The Man Who Made Them," and the Royal Television Society award-winning "Matisse: Live from the Tate and MoMa". His scores for these important landmark factual documentary series have been nominated for three Jerry Goldsmith Awards for Best Score. Stephen is currently scoring a new three-part series exploring Tutankhamen's treasures with Blink Films for Channel 4 and a six-part factual series with Bone Soup Productions for BBC2 and Michelin Star chef Tom Kerridge.
Hosted by Jeremy [Retro] at 10:00 AM