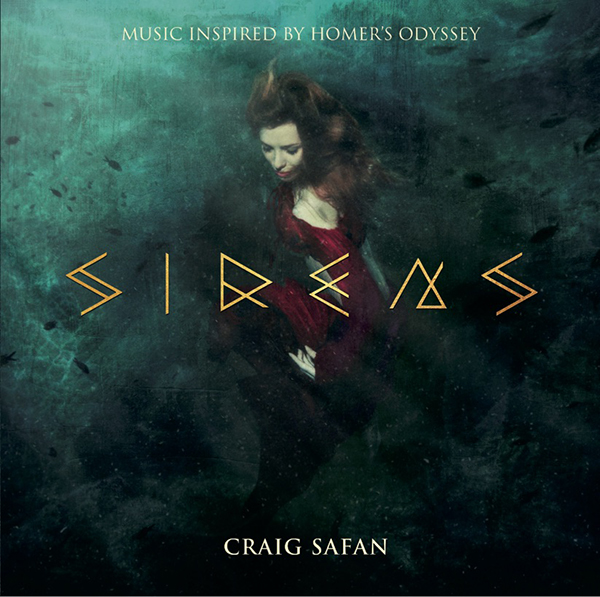 Varèse Sarabande is honored to announce the release of Sirens digitally and on CD on June 1, 2018. The album features original music by composer Craig Safan (THE LAST STARFIGHTER, the album Rough Magic). Sirens is an original composition based on the tales of the classic Greek myth The Odyssey and the amazing locations where the tales took place.

“Sirens is inspired partly by my love of The Odyssey and partly by my lifelong love of myths.  I've been enchanted by both since I was a child,” said Safan.  “These tales and their magic have resonated throughout my life. With Sirens I'm not portraying the literal tales in The Odyssey, but rather the innermost feelings and memories they convey. The inward experience and journey, the wanderings of our lives, our relationship to family and home, and the deeper sororities of existence.”

Travels to historic regions are always an inspiration to Safan.  His 2015 album Rough Magic, was inspired by the ancient caves of Southern France and Northern Spain.  Similarly, Safan traveled to Europe to soak in the atmosphere where events in The Odyssey took place. “In preparing to compose Sirens, I wanted to visit some of the actual locations that appear in The Odyssey,” continued Safan. “I found that while they are mostly unknown and imaginary, many scholars put them in and around Sicily. There I found many places that are named after the sirens, the Cyclops, the wind god, Aeolus, and Odysseus, as well as the straits where Scylla and Charybdis lurked. I traveled along the coast and visited the Aeolian Islands, exploring caves and ancient quarries, recording the natural sounds and the unique echoes and reverberations of each.”

Craig Safan has composed the music for over thirty feature films including MR. WRONG, STAND AND DELIVER, MAJOR PAYNE, NIGHTMARE ON ELM STREET IV, REMO WILLIAMS, and THE LAST STARFIGHTER.  For the small screen, Craig is best known for his work as the composer for the series CHEERS for which he was awarded eight ASCAP Top TV awards, as well as for his music for LIFE GOES ON, which earned Safan an EMMY® nomination. Craig Safan’s music has been performed by Bernadette Peters, Nathan Lane, Faith Prince, Emma Thompson, Leon Redbone, Amanda McBroom, the London Symphony, and Cincinnati Pops Orchestras.

Craig is a graduate of Brandeis University and was the recipient of both the Senior Prize in Drama and the Senior Prize in Music. Craig has given seminars or spoken at The American Film Institute, USC Film School, ASCAP Film Music Workshop, Berklee College of Music, and UC Santa Barbara. Craig is a member of the Academy of Motion Picture Arts and Sciences, where he sits on the Music Executive Committee of the Academy.  Craig also serves on the Selection Committee for the Thomas J. Watson Foundation Fellowship in New York City, an award that he was the recipient of after college.  In 2014 Craig conducted his film music at the 10th annual International Film Music Festival in Cordoba, Spain, and was pleasantly surprised to receive the festival’s Basil Poledouris Award For A Film Music Legend.

“Sirens is most importantly an immersive experience which might take one to another world where myth, magic, and sensuality are on the surface and upfront,” said Safan. “I truly enjoyed entering this mythic world and composing its music. Close your eyes, let the present drop away, and dive into the world of Sirens, Odysseus, and your forgotten past.”

Varèse Sarabande is honored to announce the release of Sirens digitally and on CD on June 1, 2018.