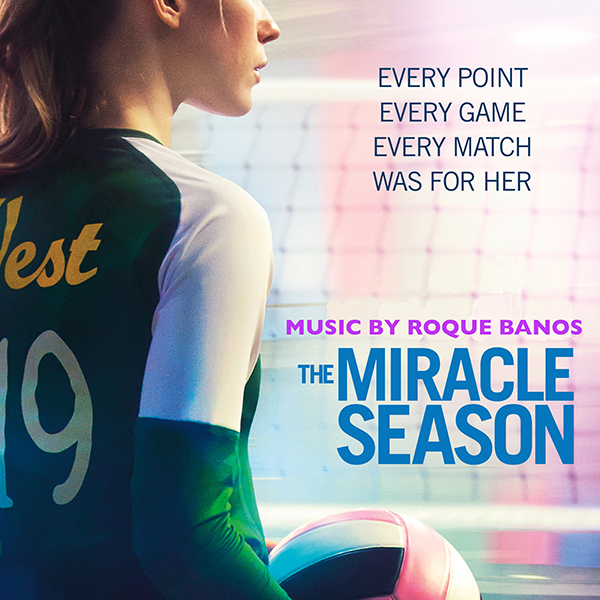 THE MIRACLE SEASON, which premiered in theaters last month, features original music by Spanish composer Roque Baños (THE COMMUTER, IN THE HEART OF THE SEA).  The soundtrack will be released digitally by Meliam Music.

THE MIRACLE SEASON is based on the inspiring true story of West High School girl's volleyball team. After the tragic death of the school's star player Caroline "Line" Found, the remaining team players must band together under the guidance of their tough-love coach in hope of winning the state championship.  The film was directed by Sean McNamara and stars Helen Hunt, William Hurt, Danika Yarosh, and Erin Moriariy.

A volleyball fan himself, Baños was familiar with the West High School’s story.  “I heard from the story a couple of years before I scored the movie and was very touched by it. I remembered thinking at the time that this amazing story would make a great movie.”

Baños was able to work closely with McNamara and producer Pete Shilaimon to set the correct tone for the story.  “They wanted a very emotional and epic Americana score that encourages everyone to overcome any dramatic situation. I used a traditional orchestral sound with the addition of a marching band percussion section,” he described.

In addition Baños was able to meet Caroline Found’s father, Ernie and show him some of the score.  “He is an extraordinary man, a French horn player, that had lived through the most terrible time a father could have. But he always smiles, and he expressed how much he was touched by the theme, that he immediately thought about his daughter and every moment he spent with her. This was one of the most special moments in my life.”

Roque Baños was born in Jumilla (Murcia) in 1968. He began his musical education at the age of 9, at the Conservatorio Superior de Música de Murcia, where he finished elementary level, obtaining Honors in both Music Theory and Saxophone. In 1986, he moved to Madrid, where he completed his studies at the Real Conservatorio Superior de Musica de Madrid, with honors and several merits mentions. In 1993, he received a grant from the Ministry of Culture in Spain to study at Berklee College of Music in Boston, where he graduated Summa Cum Laude in the fields of Film Scoring and Performance in 1995, receiving the Robert Share Award for demonstrating the highest musical-dramatic level in the area of film music composition, and an achievement award for his outstanding performance abilities.

During his studies in Madrid, Roque earned a position as an officer musician in the Spanish Army, where he developed an intense compositional period writing concert music for Marching Band and Chamber ensembles. He also became an accomplished classical saxophonist, performing in a number of concert halls in Spain and abroad, premiering works by Spanish and foreign composers as well as his own. His path, however, was always directed more towards composition and conducting. He has premiered and directed his own scores at the National Auditorium in Madrid, the Reina Sofia Auditorium, the Cultural Circle of Fine Arts Hall, and several Music Halls in Spain and abroad.

In 1997 Roque wrote his first film score BACK ROADS directed by Emilio Martinez Lazaro, one of the most acclaimed directors in Spain. Since then, he has worked with many of Spain’s most renowned directors, such as Alex de la Iglesia, Daniel Monzon, Carlos Saura, and Santiago Segura, to name a few.

Roque’s first US production EVIL DEAD, directed by Fede Alvarez (with whom he has a close personal and professional relationship), has opened a door to the American market.  He has earned international recognition working with international directors like Terry Gilliam, Ron Howard, Kevin Reynolds, Spike Lee, Jonathan Glazor, and Brad Anderson, splitting time between Los Angeles and Spain.

His latest films include THE COMMUTER directed by Jaume Collet-Serra, YUCATAN by Daniel Monzón, SIN RODEOS by Santiago Segura, and THE MAN WHO KILLED DON QUIXOTE directed by Terry Gilliam, all set to be release in 2018. (www.roquebanos.es)