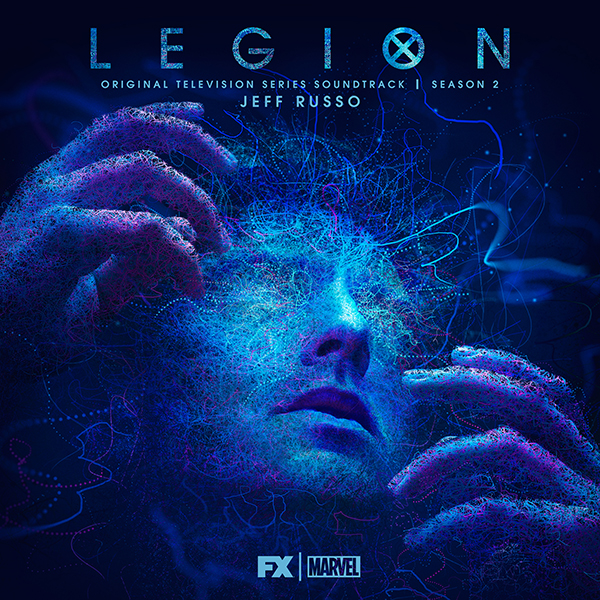 Lakeshore Records will release the LEGION SEASON TWO - Original Television Soundtrack digitally on May 25th, featuring original music by Emmy® Award winning composer Jeff Russo (Fargo, The Night Of). Legion is the story of “David Haller” (Dan Stevens), a man who believed himself to be schizophrenic only to discover that he may actually be the most powerful mutant the world has ever seen.  Russo goes deeper and pushes more boundaries with the second season score.  Legion currently airs Tuesdays at 10pm ET/PT on FX.

Says Russo: “There wasn’t a directive this season except to write some new themes for our new characters and locations.  Vermillion! Farouk! Future Syd! It’s a roller coaster ride or maybe a fast carousel.  Always keeping the viewer and listener off balanced and engaged in the emotional through line of the narrative is the most important part. I’m always asking myself how can I stay in the heart of the story and color outside the lines.”

Two-time Grammy-nominated and Emmy-winning composer Jeff Russo is at the top of his field, scoring varied and compelling music for television, film and video games. For his work,  Russo earned an Emmy Award and received two Emmy nominations for his memorable music on FX’s Fargo. He recently completed the score for season one of CBS’s Star Trek: Discovery, Starz’s Counterpart, and the hit drama Power. Additionally, Russo scored HBO’s Golden Globe® and Emmy-nominated series The Night Of, FX’s John Singleton series, Snowfall, and the Netflix original show, Altered Carbon. Russo also composed the music for Jon Avnet’s film Three Christs, which premiered at the 2017 Toronto International Film Festival, and Craig Macneill’s film, Lizzie, which premiered at the 2018 Sundance Film Festival. Earlier this year, Russo received a BAFTA nomination for “Best Music” for Annapurna Interactive’s indie video game, “What Remains of Edith Finch.”

In addition to composing music for film and television, Russo is a founding member, lead guitarist and co-songwriter of two-time GRAMMY-nominated, multi-platinum selling rock band, Tonic.  Their debut album, "Lemon Parade," posted three singles in the U.S. Mainstream rock charts' Top 10, with “If You Could Only See," rocketing to number one.  In 2003, the band received two Grammy nominations, one for "Best Rock Performance by a Duo or Group with Vocal" for "Take Me As I Am," and one for "Best Rock Album."

Great soundtrack for an awesome show - best superhero show ever.