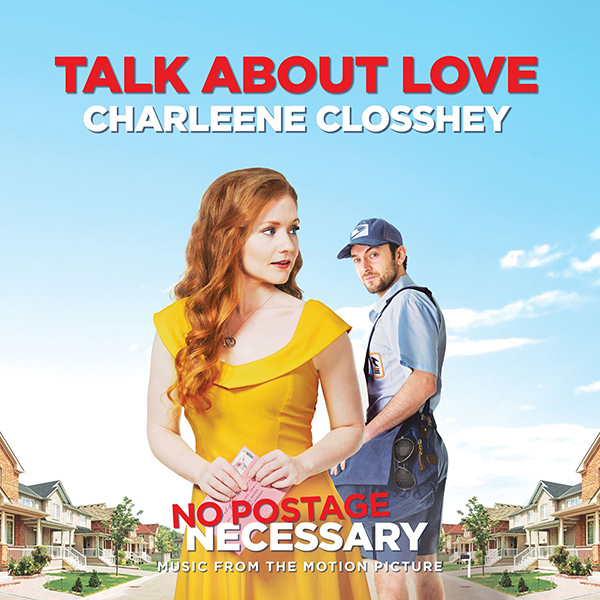 Recently announced the digital-only soundtrack for the Indie Dramedy No Postage Necessary will be available on Friday, October 19. “Talk About Love: Music from the Motion Picture No Postage Necessary” marks the first soundtrack from singer/songwriter/composer, Charleene Closshey. No Postage Necessary made history earlier this year when it became the first-ever film to be released via the Blockchain, allowing consumers to stream using cryptocurrency. The film was released in select theaters July 6, 2018 and via blockchain technology and VOD on July 10, 2018, and now available on Blu-ray and DVD as of October 2, 2018.

Closshey composed, orchestrated and recorded the film’s musical piano-based orchestral score. The soundtrack was produced by award-winning songwriter, engineer and producer Brent Maher. Maher has won six Grammy Awards and is known for his work with legendary musicians such as The Judds, Willie Nelson, Elvis Presley and Tina Turner. As live singing is featured throughout the film, the album is composed of two sections: Vocals, featuring a studio-produced analog sound with only live instruments produced on a Trident TSM 1978 console engineered by Grammy award winning engineer Charles Yingling, and Score, featuring an interplay of digital soundscapes Closshey herself programmed with select analog components.

“When discussing the score’s overall direction with director Jeremy Culver, Culver wanted the sonic space to reflect the intersect of Analog and Digital, mirroring the main themes and components of the film itself,” said singer/songwriter/composer Charleene Closshey. “Working with my dear friend Brent Maher really brought the soundtrack to life - Brent makes magic at a console. Combining this ‘in the box’ approach with an ‘out of the box’ sound was both a challenge and exciting exploration.”

The soundtrack features a duet between Closshey and fellow No Postage Necessary star George Blagden on the track “‘Til I Loved You”, heard exclusively on the soundtrack. Blagden’s voice in heard in the film singing the beginning of this song. Blagden and Closshey co wrote this track with Nashville veterans Brent Maher and slide guitar legend Mark Selby.

Additionally, Closshey duets with Irish singer/songwriter Gareth Dunlop on track “Give Me Your Heart”, the same song the two performed live in the film. For the soundtrack, Closshey composed an orchestral string score, teaming with Bulgarian conductor Lyubomir Denev to record live strings: Closshey monitored the session live from Nashville while the musicians performed in Sofia, Bulgaria.

Charleene Closshey is an American actress, musician, composer and producer who frequently focuses on stories that empower self-choice. A classically trained artist, Closshey’s first instrument was piano - she read music before she read words. She began playing violin at age 12. Additionally, Closshey  studied drama and music disciplines at Circle in the Square, The Juilliard School, New York University, and Berklee Music. She has released multiple albums and singles across genres, and has performed on stage with Josh Groban, the Trans Siberian Orchestra, Ricky Skaggs, Frank Sinatra, Jr. and legendary country artist, Charlie Daniels, to name a few. Closshey co-founded production company Two Roads Picture Co. with professional partner Jeremy Culver. In addition to creating the soundtrack for No Postage Necessary, Closshey also starred in the film.

The album is being distributed by Satya Records. “Talk About Love: Music from the Motion Picture No Postage Necessary” will be available via iTunes/Apple, Spotify, Amazon and Google.