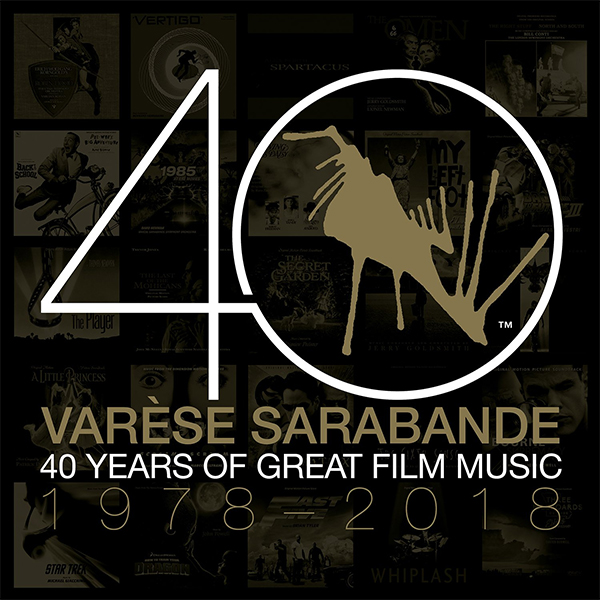 (November 5, 2018 – Los Angeles, CA) – Varèse Sarabande will release VARÈSE SARABANDE: 40 YEARS OF GREAT FILM MUSIC 1978-2018 on November 16, 2018 with a 2 CD set and 2 LP set available to all retailers. Special packages featuring limited edition merchandise are also available exclusively on VareseSarabande.com. The first 40 of each of these packages will include special Varèse Sarabande celebration items.

This is a celebratory collection of the biggest composers and albums to grace the Varèse Sarabande`s catalog during an unparalleled 40-year history as the preeminent soundtrack label. The greatest composers; Bernard Herrmann, Alex North and Jerry Goldsmith of Hollywood’s Golden Age to the Modern Age of Hans Zimmer, James Horner and Brian Tyler. These composers and more are represented with some of their finest compositions; Vertigo, Spartacus, Aliens, Driving Miss Daisy, The Matrix, The Omen, Whiplash, and Star Trek.

This 40th Anniversary LP/CD bundle, limited to 200 units includes:
-A Copy of the 2LP set, Varèse Sarabande: 40 Years of Great Film Music 1978-2018
-A Copy of the 2CD set, Varèse Sarabande: 40 Years of Great Film Music 1978-2018
-One set of LP test pressings shipped direct from the manufacturing plant. Only 40 sets were made, and each come hand numbered 1-40
-A white turntable slipmat with an alternative interpretation of our 40th anniversary album logo in red and black ink
-Set of 3 enamel pins showing the evolution of the Varèse logo over 40 years. Comes in an acrylic keepsake case. Sets are individually numbered 1-250 via a stamp on the back of our current logo pin
-Black t-shirt with our 40th anniversary album logo where the left breast pocket would be. 100% cotton. Available in five different sizes, ($2 extra for XXL)
-Natural colored multi-purpose canvas tote bag featuring the current Varèse Sarabande logo
-Additional items Strictly limited to 40 packages
Varèse Sarabande will release VARÈSE SARABANDE: 40 YEARS OF GREAT FILM MUSIC 1978-2018 on November 16, 2018 with a 2 CD set and 2 LP set. To purchase, please visit https://found.ee/40thCDBundle & https://found.ee/40thCDLPBundle