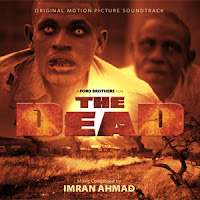 Info: Howlin' Wolf Records is very proud to present THE DEAD by British Indian Film Composer and Music Producer Imran Ahmad (composer for the award winning documentary MAYOMI). THE DEAD directed by The Ford Brothers, Howard and Jonathan Ford, is an acclaimed and unique zombie film shot on location in West Africa, which follows the journey of an American mercenary/engineer and an African militia officer as they struggle to survive a zombie pandemic and reconnect with family amidst a world in chaos and turmoil. The music for THE DEAD is a hauntingly, beautiful score composed by Imran Ahmad, rich with percussion, flutes, and acoustic ancestral textures provided by Gambian kora player Jally Kebba Susso with stirring and evocative chants/vocals by Eritrean singer Saba Tewelde.

Zombies, Zombies and more Zombies!
Howlin' Wolf Records has released their 13th score late last month to a soon to be cult classic film "THE DEAD" and I am proud to be able to share it with you. Listen to the sample below and then move on over and pick up a Cd today, this one is going to go fast!
-Jeremy [Retro-Zombie]

it will go faster than a meaty zombie treat.....

I remember the movie and music, not bad on either front!