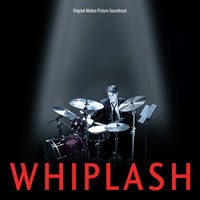 “The director Damien [Chazelle] and I started talking about this score a year before the cameras rolled,” said Hurwitz.  “While the original jazz would be somewhat straightforward, the movie's dramatic underscore was more of a conundrum.  How do you score a movie that already has so much music in it?” To navigate these waters, Hurwitz would use the techniques of electronic scoring, but with all real instruments, in a way that would haunt him much in the same way that WHIPLASH’s lead character was haunted….

Andrew Neyman (Miles Teller) is an ambitious young jazz drummer, single-minded in his pursuit to rise to the top of his elite east coast music conservatory. Plagued by the failed writing career of his father (Paul Reiser), Andrew hungers day and night to become one of the greats. Terence Fletcher (J.K. Simmons), an instructor equally known for his teaching talents as for his terrifying methods, leads the top jazz ensemble in the school. Fletcher discovers Andrew and transfers the aspiring drummer into his band, forever changing the young man's life. Andrew's passion to achieve perfection quickly spirals into obsession, as his ruthless teacher continues to push him to the brink of both his ability-and his sanity.

“Our scoring session has to be one of the most tedious ever, as I recorded the score cues one note at a time.  Literally, one note at a time,” Hurwitz explained.  “What this allowed me to do was layer and manipulate the notes in a way that musicians can't.  The resulting textures are reminiscent of an electronic score, except every note was either a sax, trumpet, trombone, piano, vibe, or upright bass.  The majority of the notes in this score are slowed down to about 1/3 time, creating a hellish version of a big band sound. Damien and I joked that it’s like Miles Teller's character Andrew is being tortured by the very instruments he makes music with.”

The result of Hurwitz’s meticulous work would help propel the music driven film WHIPLASH to collect both the Grand Jury Prize and the Audience Award at the 2014 Sundance Film Festival.  Peter Debruge of Variety raved,  “Miles Teller drums his heart out — and then some — in writer-director Damien Chazelle’s stellar career-starter, WHIPLASH which demolishes the cliches of the musical-prodigy genre, investing the traditionally polite stages and rehearsal studios of a topnotch conservatory with all the psychological intensity of a battlefield or sports arena.”

“Woven into the textures of the score is one familiar melody -- the tune that J.K. Simmons' character Fletcher plays in the jazz club,” Hurwitz described. “The melody appears in almost every score cue, sometimes clearly stated, sometimes more hidden.  It appears in major, minor, and other modes, depending on the situation.  Damien and I love scores that are economical with melody -- scores that establish one or two themes or motives, and use those themes or motives in every way they can be used.  In this case, we found that one versatile melody was all we needed.  The melody tied to Fletcher expressing himself at the piano seemed like the right melody.”

In addition to the original score and big band pieces from Hurwitz, the soundtrack includes original big band competition pieces by Tim Simonec.  “After being the orchestrator of so many films for the past few years, it was very exciting to be asked to compose … and in one my favorite idioms, Big Band Jazz,” said Simonec.  “Working with director Damien Chazelle was truly an amazing experience. His knowledge of Big Band Jazz made him communicate exactly what he wanted for each scene, and his suggestions after hearing my ideas made the compositions that much better.”

Sony Pictures Classics presents WHIPLASH, in theaters in NY and LA on October 10, 2014.   WHIPLASH - Original Motion Picture Soundtrack from Varèse Sarabande Records will be available digitally and on CD October 7, 2014.