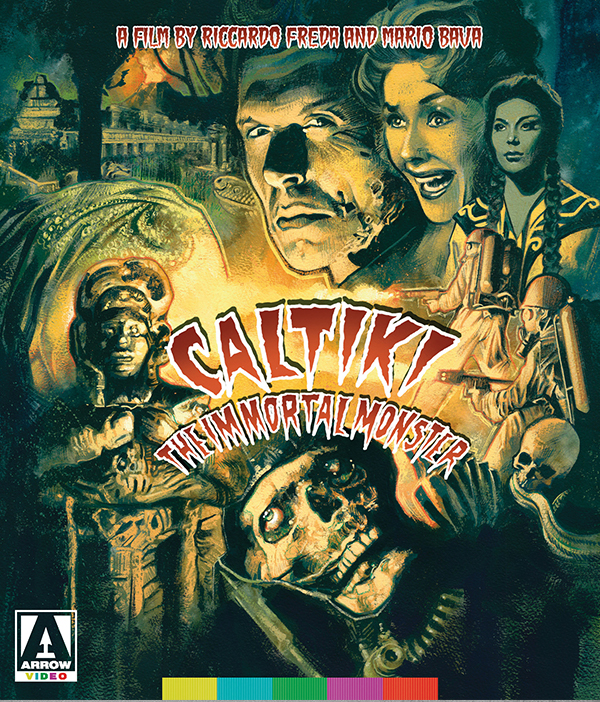 Arrow Video presents a collaboration between two giants of Italian cult cinema - Riccardo Freda (The Vampires, The Horrible Dr Hichcock) and Mario Bava (5 Dolls for an August Moon, Blood and Black Lace)! A team of archaeologists led by Dr John Fielding (John Merivale, Circus of Horrors) descends on the ruins of an ancient Mayan city to investigate the mysterious disappearance of its inhabitants. However, the luckless explorers get more than they bargained for when their investigation of a sacrificial pool awakens the monster that dwells beneath its waters - the fearsome and malevolent god Caltiki. Though Riccardo Freda received sole directing credit, a significant portion of the film was in fact the work of Mario Bava, who also served as its cinematographer and was responsible its striking special effects. Drawing on a diverse array of influences, from The Quatermass Experiment to the works of HP Lovecraft, Caltiki the Immortal Monster is a unique and unforgettable sci-fi chiller which showcases these two legendary filmmakers at their most inventive. Presented here for the first time in a newly restored high definition transfer, Caltiki shines - and terrifies! - like never before.

-Brand new 2K restoration of the film from the original camera negative
-High Definition Blu-ray (1080p) and Standard Definition DVD presentations
-Original mono Italian and English soundtracks (lossless on the Blu-ray Disc)
-Newly translated English subtitles for the Italian soundtrack
-Optional English subtitles for the deaf and hard of hearing for the English soundtrack
-New audio commentary by Tim Lucas, author of Mario Bava: All the Colors of the Dark
-New audio commentary by Troy Howarth, author of The Haunted World of Mario Bava and So Deadly, So Perverse: 50 Years of Italian Giallo Films
-From Quatermass to Caltiki, a new discussion with author and critic Kim Newman on the influence of classic monster movies on Caltiki
-Riccardo Freda, Forgotten Master, an archival interview with critic Stefano Della Casa
-The Genesis of Caltiki, an archival interview with filmmaker Luigi Cozzi
-Archival introduction to the film by Stefano Della Casa
-Alternate opening titles for the US version
-Reversible sleeve featuring original and newly commissioned artwork by Graham Humphreys
-FIRST PRESSING ONLY: Illustrated collector's booklet featuring new writing by Kat Ellinger and Roberto Curti