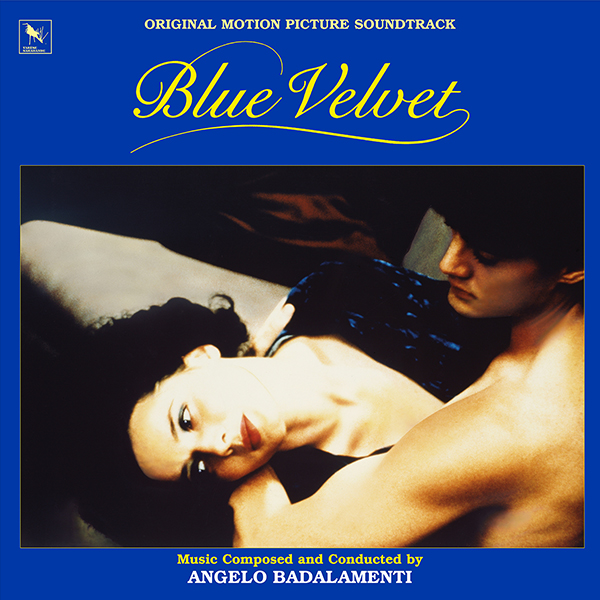 Varèse Sarabande will release a vinyl version of the BLUE VELVET – Original Motion Picture Soundtrack on May 19, 2017.  Available widely for the first time in nearly 30 years, the soundtrack features the beloved original score by Angelo Badalamenti (TWIN PEAKS, MULHOLLAND DRIVE).

BLUE VELVET marked the first musical collaboration between auteur director David Lynch and composer Badalamenti.  This amazing release allows listeners to experience Blue Velvet's evocative score that when juxtaposed with Lynch's use of early pop tunes, created a singular disquieting effect. Together with Lynch’s purposeful eye, this score formed helped form a thematic language that inspired a generation of films and nightmares.

In BLUE VELVET, Jeffrey Beaumont (Kyle Maclachlan), a college student who returns home after his father has a stroke. When he discovers a severed ear in an abandoned field, Beaumont teams up with detective's daughter Sandy Williams (Laura Dern) to solve the mystery. They believe beautiful lounge singer Dorothy Vallens (Isabella Rossellini) may be connected with the case, and Beaumont finds himself becoming drawn into her dark, twisted world, where he encounters sexually depraved psychopath Frank Booth (Dennis Hopper).

Angelo Badalamenti is an acclaimed and prolific composer who has written some of the most unique film scores of our time. He is widely known for his long-standing collaboration with the director David Lynch, which has produced a creative and inspired body of work. Badalamenti began working in film with his scores FOR LAW AND DISORDER and GORDON'S WAR.  In 1986, he was hired by a young David Lynch to be Isabella Rossellini's vocal coach for BLUE VELVET, scoring the film, writing the feature song "Mysteries of Love" with Lynch, and even appears onscreen in the piano bar scene. His close relationship with Lynch served as a springboard and since BLUE VELVET Badalamenti has scored Lynch's films and projects, as well as those of many other preeminent directors.

Badalamenti has received a Grammy Award for his theme to the groundbreaking TV series TWIN PEAKS. The Soundtrack Album from TWIN PEAKS has achieved gold status in 25 countries. He received an Independent Spirit Award and a Saturn Award for TWIN PEAKS: FIRE WALK WITH ME and BAFTA's Anthony Asquith Award for his score for THE COMFORT OF STRANGERS.  Badalamenti will be reuniting with David Lynch for the new SHOWTIME limited series TWIN PEAKS, which picks up 25 years after the events around the murder of Laura Palmer.