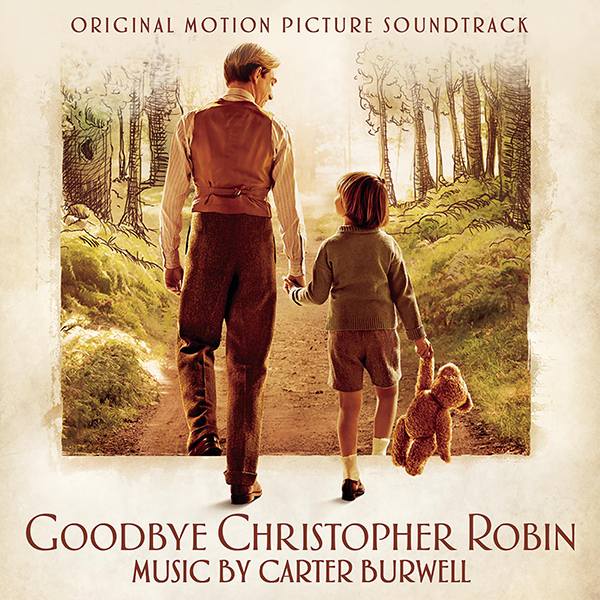 GOODBYE CHRISTOPHER ROBIN gives a rare glimpse into the relationship between beloved children’s author A. A. Milne (Domhnall Gleeson) and his son Christopher Robin (Will Tilston), whose toys inspired the magical world of Winnie-the-Pooh. Along with his mother Daphne (Margot Robbie), and his nanny Olive (Kelly Macdonald), Christopher Robin and his family are swept up in the international success of the books; the enchanting tales bringing hope and comfort to England after the First World War. But with the eyes of the world on Christopher Robin, what will the cost be to the family?

Goodbye Christopher Robin is directed by Simon Curtis (My Week with Marilyn, Woman in Gold) and will be released in US theaters by Fox Searchlight Pictures on October 13, 2017.  The screenwriters are Frank Cottrell-Boyce and Simon Vaughan, and the producers of the film are Damian Jones and Steve Christian.
Carter Burwell has composed the music for more than 80 feature films, including Blood Simple, Raising Arizona, Miller's Crossing, Barton Fink, The Hudsucker Proxy, Rob Roy, Fargo, The Spanish Prisoner, Gods And Monsters, Velvet Goldmine, Three Kings, Being John Malkovich, O Brother, Where Art Thou? (BAFTA Nominee for Film Music), Before Night Falls, A Knight’s Tale, The Rookie, Adaptation, Intolerable Cruelty, No Country For Old Men, In Bruges, Burn After Reading, Twilight, Where The Wild Things Are (Golden Globe® Nominee for Best Original Score), A Serious Man, The Blind Side, The Kids Are All Right, True Grit, Twilight: Breaking Dawn – Part 1 & 2, And The Fifth Estate, Mr. Holmes, Legend, The Finest Hours, Hail,Caesar!, The Family Fang And The Founder.

Burwell most recently wrote the music for the drama Carol starring Cate Blanchett and Rooney Mara.  Burwell received his first Oscar® nomination for Best Original Score for Carol.   He was also was nominated for a Golden Globe® and a Critics’ Choice Movie Award for Carol.  Burwell won the Los Angeles Film Critics Association’s Award for Best Music Score for Carol and Anomalisa. His theater work includes the chamber opera The Celestial Alphabet Event and the Mabou Mines productions Mother and Lucia’s Chapters of Coming Forth by Day. Burwell has taught and lectured at The Sundance Institute, New York University, Columbia University, and Harvard University.

Carter Burwell said about the score:

“One of the riskier decisions Simon Curtis and I made with the score was to withhold the main theme until the middle of the film, when A. A. Milne begins to write and his friend Ernest Shepard begins to illustrate “Winnie The Pooh”. We did this to make that moment especially noteworthy, to make it the turning point of the story. Before that point, the music plays many things - the trauma of war, the transition from city to country life, the awkward relations between Christopher Robin and his parents. But then Pooh changes everything.”