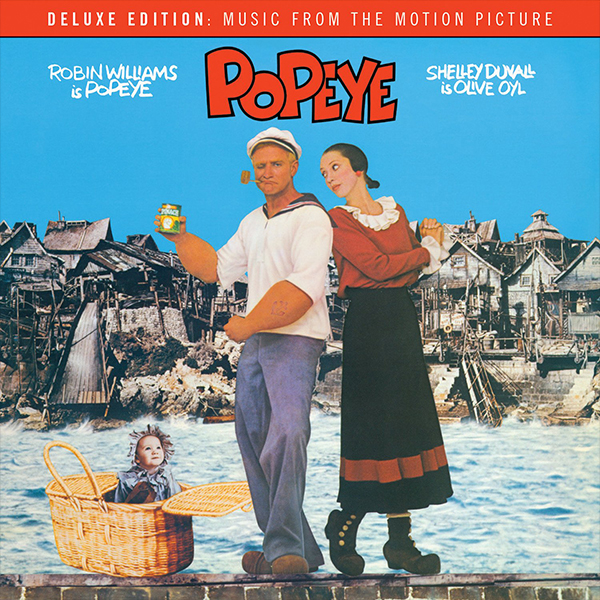 Well blow me down!  Varèse Sarabande will release the most comprehensive version of the Popeye soundtrack ever assembled, featuring the film’s beloved songs by Harry Nilsson, performed by the cast (including Robin Williams, Shelly Duvall, and Ray Walston), never-before released original score composed by Thomas Pierson, and an entire disc of demos performed by Harry Nilsson. The POPEYE – Deluxe Edition Music From the Motion Picture, which also includes newly-discovered images and extensive liner notes, will be released digitally and on CD on September 29, 2017.

Looking for the father (Ray Walston) who deserted him as a baby, a sailor named Popeye (Robin Williams) journeys to the port town of Sweethaven. Popeye befriends an assortment of eccentrics and falls in love with Olive Oyl (Shelley Duvall), who already has a suitor, the bully Bluto (Paul L. Smith). Popeye also discovers an abandoned baby, Swee'Pea, whom he raises as his own. But when the spurned Bluto kidnaps Olive and the child, Popeye takes action, with the help of his magic spinach….

A rare co-production between Paramount Pictures and Walt Disney Productions – the 1980 film POPEYE was a live-action musical version of E.C. Segar’s classic comic strip, directed by Robert Altman and produced by Robert Evans.  The idea was first presented to him by Evans during a party at the producer’s home in mid-1977.  Nilsson’s initial response, “We shared two or three vodkas, and then I told him I didn’t think it was such a good idea to do POPEYE.”

Eventually though he came on board – though the team at Paramount still needed convincing.  In May 1979 Nilsson was given three weeks to write three songs for the film.  He would present home demos for the tracks “He Needs Me,” “I’m Mean,” “Swee’Pea’s Lullaby,” amongst other.

“I think Harry liked the working class aspect of it – Popeye, the Man in Crisis,” Van Dyke Parks, who starred as Hoagy the Piano Player and arranged/conducted the music, said of Nilsson’s involvement in the film. “[Director Robert] Altman gave Harry an incredible carte blanche for the music, and that was wonderful. Altman and Harry shared a lot of things, for example, a deep understanding about the abstraction of the creative process, understanding that a concept might be revealed, rather than planned. Both had that skill, that extemporaneous air.”

The songs written by Nilsson were recorded on location in Malta, with Parks being charged to “sweeten” the score in Los Angeles.  But a musician’s strike would lead to a change in tactics, with composer Thomas Pierson being brought on board and the recording moved to London.  “They needed somebody to bring things to a conclusion,” Pierson explained. “And they wanted to use a lot of the traditional Popeye/nautical sort of themes, and they basically didn’t have any of that.”

For the first time available digitally and on CD, Varèse Sarabande has compiled the original soundtrack recordings, original score by Pierson, and the demo recordings performed by Harry Nilsson for the Popeye - Deluxe Edition: Music from the Motion Picture two-disc set.