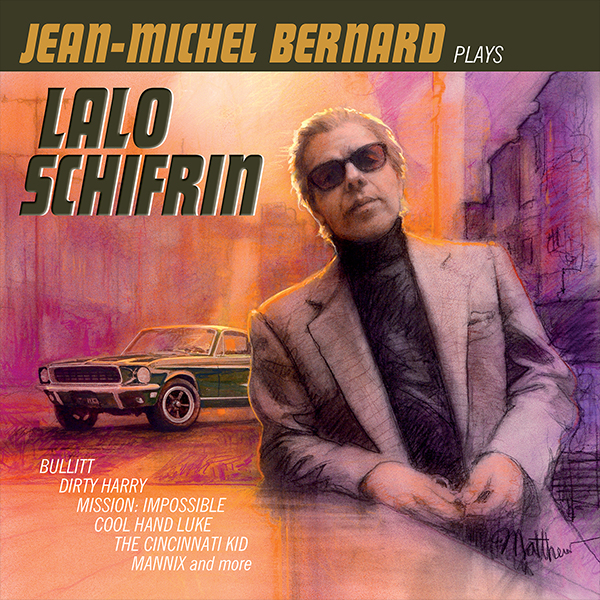 The result of a concert performed by Jean-Michel Bernard celebrating the music of legendary composer Lalo Schifrin at the 2016 La Baule Film Music Festival in France, Varèse Sarabande will release a new studio recording of JEAN-MICHEL BERNARD PLAYS LALO SCHIFRIN digitally and on CD October 6, 2017.  The album features three piano duets performed by Bernard with Schifrin himself!

Lalo Schifrin calls Jean-Michel Bernard his ‘soul brother.’  The two first met over 25 years ago, but it wasn’t until they were reacquainted in 2016 that they would strike up a musical friendship.  Schifrin was the guest of honor at the 2016 La Baule Film Music Festival.  Bernard was asked to give a tribute concert to celebrate the Maestro, and re-orchestrated Lalo’s themes for the performance.  Though not originally scheduled to – Bernard invited Lalo to join him on stage and the two played 35 minutes of amazing improvisations, culminating in Schifrin’s beloved “Mission: Impossible”.

“After a Dirty Harry Blues duo with Pierre Boussaguet, he launched into a wild piano duel with Jean-Michel on Happy Birthday—it really was Boussaguet's birthday—before ending on a white-hot reprise of Mission: Impossible… thirty-five minutes later!” described the French journalist Stéphane Lerouge. “The audience, fully aware that they had witnessed a historic happening, gave them a standing ovation that stopped the clock.”

Inspired by the music of Schifrin and determined to recreate the historic moment by recording his arrangements for this album, Jean-Michel began recording this album – featuring Lalo’s beloved music from Mannix, Cool Hand Luke, Bullitt, The Cincinnati Kid, The Cat, the Dirty Harry Suite (featuring composer – and Clint’s son – Kyle Eastwood on electric bass), plus a melodic trip to Lalo’s roots with pieces like Lalo’s Bossa Nova and Tango Del Atardecer. After an initial recording session in France, Lalo invited Jean-Michel to Los Angeles to record a series of duets at the legendary Capitol Studios where Lalo would join him for three pieces.

“Jean-Michel reserved two pieces for him [Lalo], each for two pianos: Chano (originally written for Gillespie), and a lengthy introduction to The Plot, like some fantasy joust nourished on jubilant quotes,” wrote Lerouge. “He also built up an original suite combining Recuerdos from Che! (with a baguala rhythm) and the love theme from The Four Musketeers in Renaissance style, forming a made-to-measure piece for Sara Andon, a stunning New World classical flautist. These three piano duets, performed by Lalo and Jean-Michel, can be heard on this album: Introduction to The Plot, Chano, and The Cheketeers Suite.”

Take a musical adventure with this delightful new recording JEAN-MICHEL BERNARD PLAYS LALO SCHIFRIN.  Perhaps Schifrin himself summed it up best, "In La Baule, it was a magnificent child. From now on, it's an adult."

Paying homage to a composer... that is and always shall be "LALO SCHIFRIN"!
Jeremy [Six Strings]
Hosted by Jeremy [Retro] at 7:33 AM