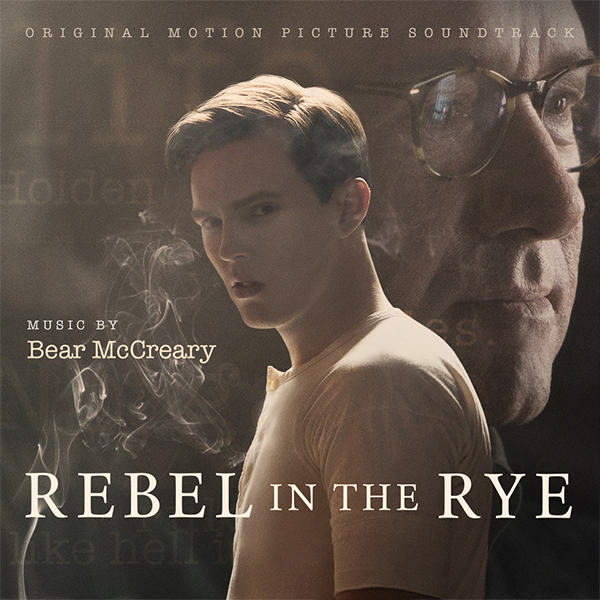 Composer Bear McCreary (10 Cloverfield Lane, TV’s Outlander), known for his infectious use of percussive instruments and out-of-the-box musical approach, channels the sounds of the typewriter for the score for the J.D. Salinger biopic, Rebel in the Rye.  Sparks & Shadows will release the soundtrack on September 8th.

Rebel in the Rye may very well be a score that McCreary was destined to write.  The son of a novelist, the sound of a typewriter has been a companion since he was a child.  “The percussive cadence of typewriter tapping has rattled around my brain since I was born,” he said.  Scoring Rebel in the Rye gave McCreary the chance to channel those sounds, both figuratively and literally, into a rich, orchestral tapestry.

It took some convincing, though, for writer/director Danny Strong to see that McCreary, more known for films such as 10 Cloverfield Lane, and TV shows like The Walking Dead and Battlestar Galactica, was the right man for the job.  The two however shared a connection and musical inspiration – the great Elmer Bernstein.  After learning that McCreary was Elmer’s last protégé, working with him for nearly a decade, Strong was intrigued, and asked for musical demos from the composer.  Any reservations Strong may have had were quickly put to rest, and the two worked closely together during the scoring process.

Inspired by the images of Salinger typing away at his greatest masterpiece, McCreary opted to use two grand pianos to represent its sound.  “The close-up shots of typewriter hammers striking paper reminded me of hammers striking piano strings,” stated McCreary. “The way Salinger sits at the typewriter, blasting off furious finger movements, reminded me of how I sit at the piano when I play.”  A different kind of keyboard – an actual typewriter – makes an appearance as a percussive instrument, and can be heard on the tracks “Early Writing” and “Typewriter Drums.”

Just as the song ‘Coming Through the Rye’ played an important role for Salinger in The Catcher in the Rye, it would play an important role for McCreary.  A bit of a scholar on Scottish music, he arranged a new version of it, which is performed by McCreary’s wife, vocalist Raya Yarbrough.  Rebel in the Rye also allowed McCreary to show off his jazz chops. Together with jazz arranger Jeff Hoeppner, he composed original numbers for the scenes set in swinging jazz clubs.

Rebel in the Rye afforded McCreary the opportunity to write perhaps his most personal score to date. “I am proud to have been a part of Danny Strong’s unique vision of J.D. Salinger’s literary gifts, and to have scored a film of such poignant beauty,” McCreary concluded.

The genius of J.D. Salinger is brought to life by writer/director Danny Strong, underscored by Bear McCreary. IFC Films presents Rebel in the Rye in theaters on September 8, 2017.  Sparks & Shadows will release the Rebel in the Rye soundtrack digitally the same day, and on CD shortly thereafter.