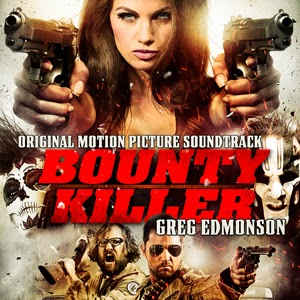 "It was a complete joy to write the music for BOUNTY KILLER,” said Greg Edmonson. “The Nashville orchestra played their hearts out with beauty and great emotion. The rowdy action cues rock big time---and of course the Los Angeles musicians are never less than spectacular.”
Conceiving music that can range from acoustically intimate or ethnically eccentric to a grand, adventurous orchestral excursion able to traverse the globe, Tulsa-born composer Greg Edmonson is a unique musical voice in Hollywood, one that has experienced widespread acclaim in the diverse worlds of film, television and video games.

One of Greg’s early successes came on Mike Judge's long-running animated series, "King of the Hill. He followed that ride by developing the distinctive sound of Joss Whedon's revered sci-fi show "Firefly," conjuring a unique orchestral Americana style that artfully integrated such culturally diverse instruments as the dobro, duduk, and saz.

Greg's ability to draw out a character's melodic humanity brought him his most epic projects: three acclaimed scores for Sony/Naughty Dog's blockbuster "Uncharted" video game franchise. In order to bring a multi-dimensional, cinematic sound to this ongoing franchise, Greg introduced an unusually broad spectrum of moods and themes, including indigenous ethnic instrumentals, nail-biting suspense, eerie ambience, and powerful action cues. The striking originality of his scores for "Uncharted" has won Greg the recognition of his peers, culminating in a variety of industry honors that include prestigious awards from the British Academy of Film & Television Arts (BAFTA) and the Academy of Interactive Arts & Sciences (AIAS).

It’s been 20 years since the corporations took over the world’s governments. Their thirst for power and profits led to the corporate wars, a fierce global battle that laid waste to society as we know it. Born from the ash, the Council of Nine rose as a new law and order for this dark age. To avenge the corporations’ reckless destruction, the Council issues death warrants for all white collar criminals. Their hunters -- the bounty killer. From amateur savage to graceful assassin, the bounty killers now compete for body count, fame and a fat stack of cash. They’re ending the plague of corporate greed by exterminating the self serving CEO and providing the survivors of the apocalypse with retribution. These are the new heroes. This is the age of the BOUNTY KILLER.
“I think that Henry Saine (director) and Colin Ebeling (producer) are poised to make a big splash in Hollywood. This is one project where the whole is definitely greater than the sum of its parts and I am thrilled to be a part of it all," said Edmonson.

One of the coolest soundtracks that I have heard this year, I mean the gritty-guitar-wild-score-soundtrack so far. What is not to love?
Jeremy [HWR:OLM]