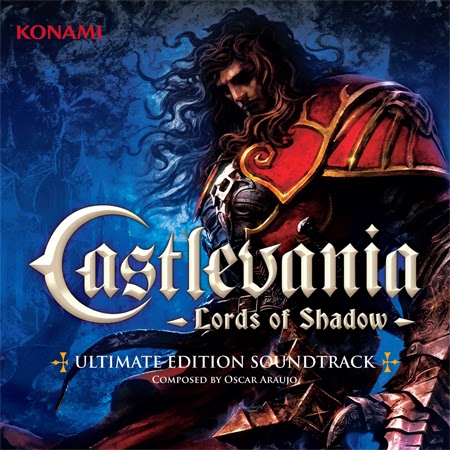 KONAMI PARTNERS WITH SUMTHING ELSE MUSIC WORKS TO RELEASE CASTLEVANIA: LORDS OF SHADOW SOUNDTRACKS
Lords of Shadow and Mirror of Fate Original Score Albums
Available on CD and for Digital Download from October 29

Featuring the original musical score from the best-selling title in Castlevania franchise history, Castlevania: Lords of Shadow Ultimate Edition Soundtrack is scheduled for a physical release on October 29, 2013 to North American and European retail outlets through Sumthing Else Music Works, and simultaneously for digital download at iTunes, Amazon MP3 and other digital music sites. An extended version of the album, the Castlevania: Lords of Shadow Director's Cut, includes twenty previously unreleased tracks which will be available exclusively from www.Sumthing.com.

Developed by Mercury Steam in association with Kojima Productions Studio, Castlevania: Lords of Shadow (2010) is a dark and vivid new re-imagining of the Castlevania mythology. The epic original score, composed by Oscar Araujo and recorded with the 120-piece Bratislava Symphony Orchestra, received numerous accolades including 2011 'Best Original Score for a Video Game or Interactive Media' from the International Film Music Critics Association.

For more information on the Castlevania: Lords of Shadow series, please visit: http://www.konami-castlevania.com/.


Just Announced! I love this game and I am so glad that it has managed to stick around for as long as it has. Please take a look and listen to the newest score for a really cool game and the cover itself... just say "YES"!
Jeremy [HWR:OLM]
Hosted by Unknown at 7:48 AM