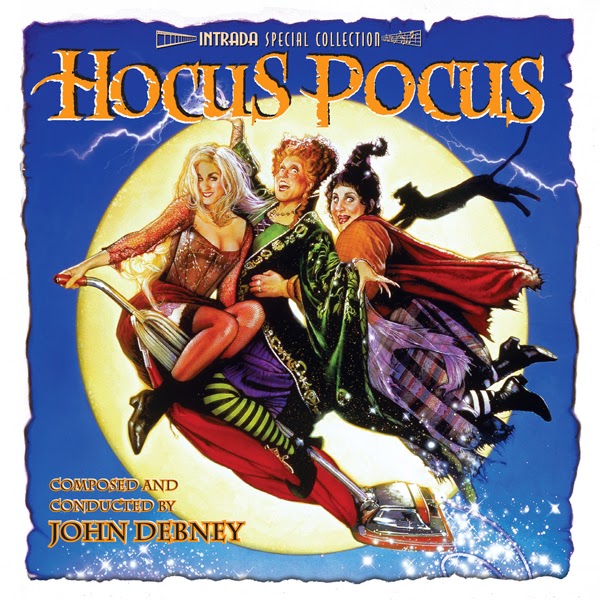 The 1993 Disney film Hocus Pocus has become in the intervening years the quintessential Halloween film. The film opens with a young girl abducted by the town’s notorious sororal coven. The girl’s older brother, Thackery, is too late to stop the witches from absorbing her youthful life force. The angry townspeople corner and hang the Sandersons, but not before the witches turn Thackery into a black cat, cursed with immortality. 300 years later the town is still obsessed with Halloween and the Sandersons, but newcomer Max (Omri Katz)is unimpressed. On Halloween night he and his sister Dani (Thora Birch) link up with his new crush, Allison (Vinessa Shaw), and unwittingly unleash the Sandersons into the 20th century.

Composer James Horner was originally hired to score Hocus Pocus, writing “Garden of Magic” before production, since Sarah Jessica Parker needed to sing it on camera, but Horner couldn’t stay on to write the whole score. The sessions at Todd-AO studios were already booked, and composer John Debney had a mere two weeks to write the entire score before taking the podium. He conducted a 92-piece orchestra and a female choir during the first week of June 1993. The result is a colorful romp that soundtrack collectors have been seeking for 20 years. For the witches, Debney knew it had to be a triplet feeling..."I guess because I was influenced by Witches of Eastwick. I wanted it to be in a minor key, and I knew it would be fun to be a little Elfmanesque. ‘The Sorcerer’s Apprentice’ is in there too..." He also wrote a budding love theme for Max and Allison and a brother/sister theme.

For this release, Intrada was given access to the original 48-track digital scoring session elements vaulted at the Disney studios.

Just Announced!
Jeremy {HWR:OLM}
Hosted by Unknown at 12:30 AM