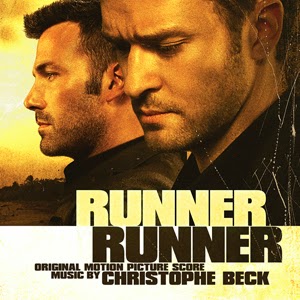 “Scoring Runner Runner offered me the opportunity to blend several musical environments,” said Beck. “There is a heavy focus on electronics to represent the cutting-edge world of online poker, but once that primary bed was established, I needed something organic to clash with the synthetic.” Christophe Beck is an Emmy-winning composer who recently scored such comedic hits as THE MUPPETS (Parts I and II), THE HANGOVER (Parts I, II and III), TOWER HEIST, THE WATCH and PITCH PERFECT. In addition to big comedies—like CRAZY, STUPID, LOVE, RED, DUE DATE, DATE NIGHT —Beck has staged the drama for films like WE ARE MARSHALL, PERCY JACKSON & THE OLYMPIANS: THE LIGHTNING THIEF, ELEKTRA, THE SENTINEL, UNDER THE TUSCAN SUN, and indie films including YEAR OF THE DOG, PHOEBE IN WONDERLAND, SAVED! and the award-winning documentary WAITING FOR SUPERMAN. Beck’s most recent scores include THE GUILT TRIP directed by Anne Fletcher starring Barbra Streisand and Seth Rogen, the Disney short entitled PAPERMAN and the indie drama THE NECESSARY DEATH OF CHARLIE COUNTRYMAN starring Shia LaBeouf. Chris’ most recent work is featured in the Fox film THE INTERNSHIP directed by Shawn Levy and starring Vince Vaughn & Owen Wilson. Coming up for Beck is Disney’s animated feature FROZEN. Up next for Chris is The Muppets sequel MUPPETS MOST WANTED.

The Canadian composer played piano from the age of five, studied music at Yale, and attended the USC film scoring program under composers like Jerry Goldsmith. He started composing in television, at the personal recommendation of Buddy Baker, and was soon writing for BUFFY THE VAMPIRE SLAYER (which led to an Emmy nomination). “I don’t tend to look under the hood too much,” Beck says about his process. “It’s really very instinctual, from-the-hip and, from an actual process point of view, improvisational.

Princeton grad student Richie (Justin Timberlake), believing he’s been swindled, travels to Costa Rica to confront online gambling tycoon Ivan Block (Ben Affleck). Richie is seduced by Block’s promise of immense wealth, until he learns the disturbing truth about his benefactor. When the FBI tries to coerce Richie to help bring down Block, Richie faces his biggest gamble ever: attempting to outmaneuver the two forces closing in on him.

“I reached for the musical sound of Costa Rica, specifically percussion, to add some regional influence,” described Beck. “I also used a more traditional orchestral string sound, especially to reinforce the relationship between Ricky and his father. Across all of these palettes, I was especially fortunate to work with talented musicians and programmers from around the world, including a cross-continental collaboration with Swedish composing duo Deadmono, who all helped me realize the sound.”