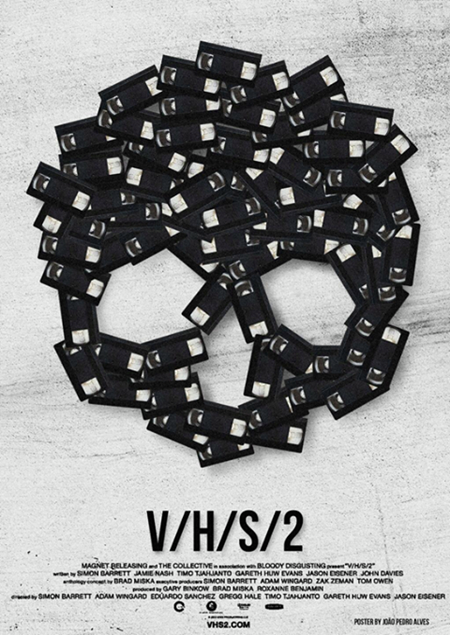 The 2012 horror anthology V/H/S left me with feelings that were mixed at best. I enjoyed the different approaches to what were essentially simplistic classic horror stories as well as the film’s overall tone, which effectively projected a feeling of unease. On the other hand, more than a few of the stories weren’t really all too satisfying. Furthermore, and this is especially the case with the wraparound segment, some of the characters were quite deplorable in a fashion that really turned me off.


Regardless of my mixed feelings, I enjoyed V/H/S enough to where I was moderately excited about a sequel, especially considering the good feedback that it had been receiving at festivals and such. But was my slight anticipation for V/H/S/2 destined to be a letdown, or could this sequel actually deliver the goods in a way that the first film wasn’t quite able to do? 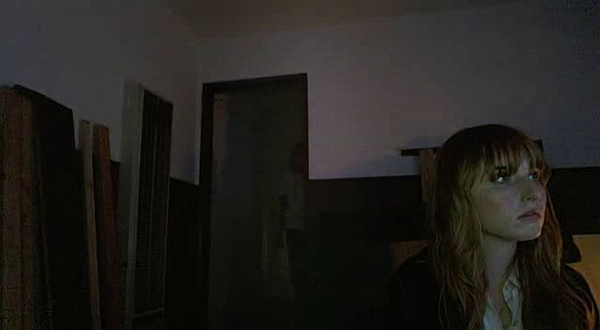 Serving as the wraparound story, Tape 49 is very similar in both tone and setting to the first film’s wraparound segment, Tape 56. Tape 49 follows two private investigators searching for a missing college student, eventually ending up in the student’s home where they find a stack of VHS tapes and other various video equipment. One of the investigators, Larry, decides to investigates the house, while the other P.I., Ayesha, watches the tapes with the hope that she’ll be able to find some clues as to the college students whereabouts.

As was the case with V/H/S’s Tape 56, the contents of these VHS tapes serve as the gateway to the four tales of terror found within V/H/S/2. However, like Tape 56, this wraparound story brings little to the table other than a slightly eerie atmosphere, which mostly has to do with how certain shots are staged. There’s something inherently creepy about watching a character sitting in a room with an open background, as it portrays this sense of vulnerability that has a way of making my skin crawl. Outside of that aspect, and a cool moment or two during the finale, this wraparound does little more than serve as a conduit to the other stories. 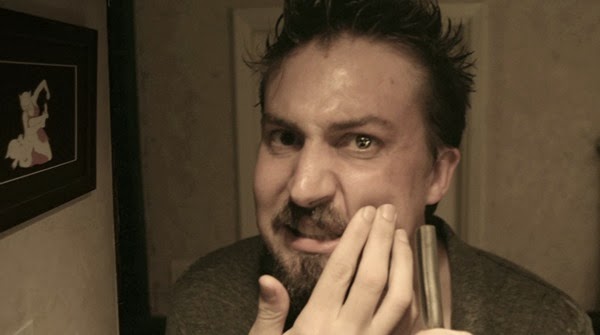 After an accident, a man named Herman (played by Wingard) is fitted with an experimental robotic eyeball. Seeing as this is the first time such technology is being used, the doctors inform Herman that they will be recording everything he sees as a way to collect data. He is also told that he might see some visual glitches while his new robotic eyeball adjusts. And soon enough Herman begins seeing strange things, but he chalks them up to his new eyeball; however, soon these visions begin to manifest themselves into something far more sinister.
The biggest strength of Phase 1 Clinical Trials is definitely in its visual style, and the first person perspective is handled in a way that effectively creates the opportunity for some nice jump scares. Overall it’s your typical transplanted organ body horror by way of Gaspar Noe’s Enter the Void, but maybe a Noe comparison is giving it a bit more credit than it deserves. Regardless, I found Phase 1 Clinical Trials to be a solid entry and an admirable way to start off the anthology proper.


A Ride in the Park
Directed by: Eduardo Sanchez and Gregg Hale 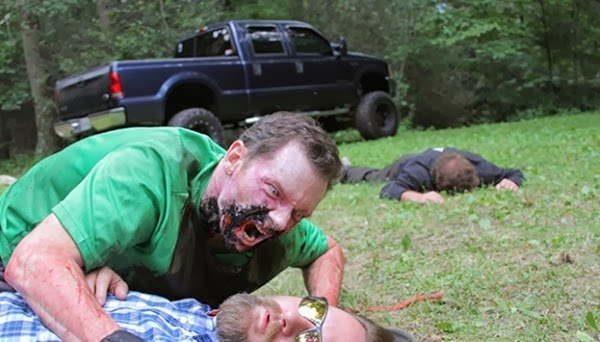 Adorned with a GoPro type of helmet camera, a young man falls victim to a zombie attack while mountain biking in the forest. What proceeds is a refreshingly original take on zombies, as much of the segment is shot from the perspective of the victim from his initial death to when he first becomes a zombie and eventually to the point when he begins to attack humans as a member of the living dead.

Anytime a filmmaker or filmmakers can give an audience a fresh take on the zombie genre is welcome, as that well has long run dry, no matter how popular it is with the youngsters. A Ride in the Park is not only immensely clever, it’s easily one of the highlights of V/H/S/2. Furthermore, it’s nice to see Sanchez involved in such a great segment, as something like V/H/S wouldn’t even exist if it weren’t for him and Daniel Myrick’s The Blair Witch Project. It’s like seeing the whole found footage genre come full circle. 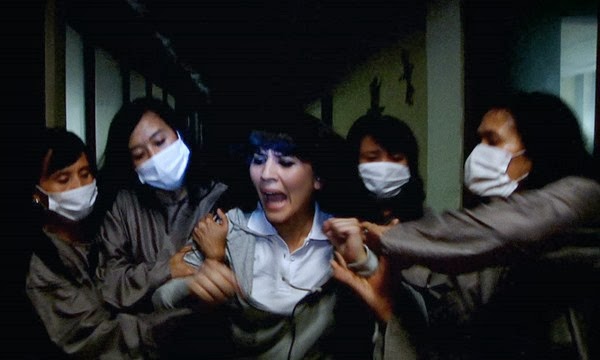 A group of documentary filmmakers enter the compound of an Indonesian cult to interview their maniacal leader, not realizing that this cult has a very special surprise planned for their visit.

Honestly, there is very little I can or want to say about Safe Haven, because I wouldn’t dare spoil the experience of what is easily the best segment in both V/H/S and V/H/S/2. Safe Haven is scary, it’s smart, it’s flat out awesome, and V/H/S/2 is worth a watch for this segment alone. It’s truly refreshing to see something so creative and original in a modern day horror film. 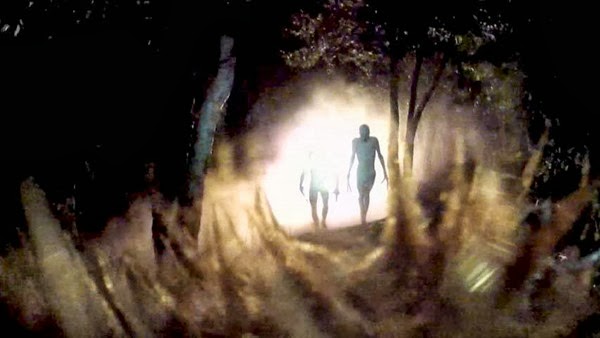 Already being perfectly summed up with its brilliant title, Slumber Party Alien Abduction follows a group of young kids who torture their older step-sister and her friends by constantly playing pranks on them, naturally capturing it all on camera for further humiliation. Taking place over the course of one night, and with their parents being out of town, the kid’s have the house to themselves, which means it’s pretty much anarchy from the word go. However, their night of innocent fun takes a horrific turn as the children find themselves under attack by aliens.

Slumber Party Alien Abduction is an entertaining take on alien invasions, and this is due, in part, to Eisner’s ability to capture the wild world of kids running free from supervision in a way that is surprisingly genuine. However, all the innocent fun and games are indeed fun and games until the invasion begins, and when the horror kicks off, Eisner delivers the goods. This is especially true during a superbly effective shot involving a boat dock that I won’t get into too much detail about as to avoid spoilers, but it’s a moment that’s at least worth mentioning. Overall, Slumber Party Alien Invasion is a satisfying way to round out the meat and taters of V/H/S/2.

Not only does V/H/S/2 greatly improve upon what was done only a year ago with the first V/H/S, it is easily one of the best horror anthology films I have seen in many years, and one that I believe I will be revisiting on a fairly regular basis.

Wrote it like I stole it, I did... thank you Matt for the killer review!
Jeremy {HWR:OLM}
Hosted by Unknown at 12:00 AM