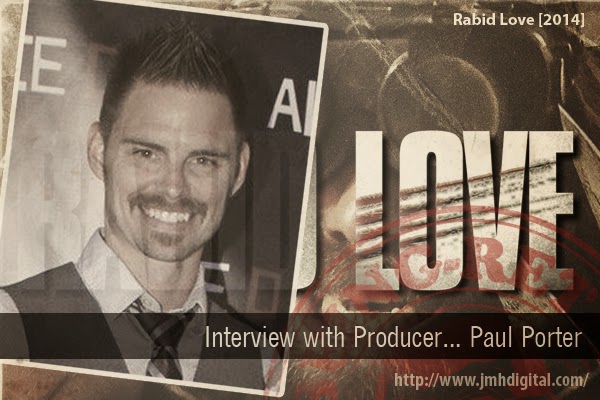 Not only are we finishing up the interviews with the great cast, now we get to chat it up with the producer/writer/actor/director/etc... Paul Porter. I didnn't spend nearly enough time talking about all the hats this man does wear, though in a production like "RABID LOVE" you do what is needed to get the job done.
Jeremy [Howlin' Wolf]

Jeremy [HWR]: As your character "John Allen" in "Rabid Love"... is there one trait you played and felt you connected from your real life?

Paul Porter: Well, I’m not an actor at all, so whenever I ‘act’, I’m really just being myself.  I was always picturing John as me during the writing and then it ended up being most convenient for the feature that I play him since we were trying to keep the cast and crew as small as possible.  I guess one trait I played up with John is him being the quiet type- I’m not a talker in real life and really only communicate vocally when absolutely necessary.  But I also kept John’s lines in the movie to a minimum because I’m a horrible actor : )

Jeremy [HWR]: Working on the film "Rabid Love" what was one of the best and worst moments you remember during the making of "Rabid Love”?

Paul Porter: I think the best moment was pretty much anytime we were shooting because, like any project, we had been writing/developing/pre-producing for such a long time that it was just so cool to actually be on set and seeing the story that had only been in our heads and on paper come to life in front of us.  I honestly can’t say that there were any bad moments I remember- it was a fun, easy shoot and what little problems we had were pretty easily overcome.

Jeremy [HWR]: Do you feel many independent films that in the horror genre are missing the point on how to get there audience?

Paul Porter: Not really- I think most of them know exactly how to get to their audience- boobs and blood.  We’ve come to love the horror community and they’re extremely supportive and cool, BUT, one thing I really don’t like about it is how many terribly written and produced movies are out there that are huge hits just because they include gratuitous nudity and gore while completely disregarding the story, characters, and overall art of filmmaking.  Something we deliberately avoided with RL was the ‘grind house’ feel that most indies go for- we wanted to stay true to the spirit of fun, somewhat wholesome 80’s movies and not play the easy, cheap thrill card.

To find out more about this cast, crew and Paul Porter... please check out one of the links below: