THE PROTECTOR 2 brings the wires, the C.G.I. and the boring. 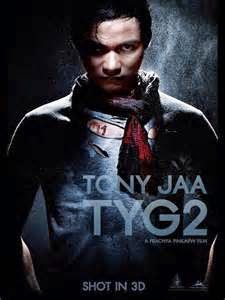 Both THE PROTECTOR (Aka HONOR OF THE BEAST) and ONG BAK were hard hitting films that brought kung-fu back to the basics.  Those two films showcased the amazing martial arts abilities of Tony Jaa who should be considered the next Bruce Lee.  Their focus was on Tony Jaa in fight after fight after fight.  The stories were there if you cared but we were all astounded at Tony Jaa's abilities to run along a crowd of peoples' shoulders or dart up a wall effortlessly or hurdle through a small wreathe of barbed wire.  There was no wires when he jumped.  There was no C.G.I. flames when his legs were lit on fire and he had to kick the crap out of some punks on bikes.  It was all him and that is what made the movies great.  People were really hit in those fight scenes.  All of it was filmed perfectly.  Now, I don't know what happened but THE PROTECTOR 2 (AKA HONOR OF THE BEAST 2 probably.) pretends to do all of that stuff and hopes that we the audience are really into C.G.I. cars, C.G.I. explosions and C.G.I. removed wires.  I cannot speak for you but as for me I am not. CLICK HERE TO CONTINUE READING!