Lionsgate: America "Imagine the World Without Her" The provocative political documentary from the creators of 2016: Obama's America, America: Imagine the World Without Her steps onto the world stage on Blu-ray (plus Digital HD), DVD (plus Digital) and Video on Demand October 28 from Lionsgate Home Entertainment. The sixth-highest-grossing political documentary of all time, the "important, inspiring, informative" (Movieguide) film will be available two weeks earlier on Digital HD October 14. During its theatrical release, America: Imagine the World Without Her joined the ranks of critically acclaimed films like Schindler's List, The Godfather, Forrest Gump and Dances with Wolves by earning one of only 52 A+ Cinema Score ratings in the last 29 years, the benchmark for audience reactions. Co-written and co-directed by The New York Times best-selling author Dinesh D'Souza, based on his book America: Imagine a World Without Her, and produced by Academy Award®-winning producer, Gerald R. Molen (Best Picture, Schindler's List, 1993), America: Imagine the World Without Her attempts to show viewers why America as a nation is more important to the world than we could ever imagine.

What would the world look like if America never existed? Dinesh D'Souza, best-selling author and creator of 2016: Obama's America, explores this fascinating question in this stirring, thought-provoking documentary. Through reenactments of landmark events in America's history and insightful interviews with leading historians, D'Souza brings us face-to-face with the brave heroes who built this great nation-and offers a powerful defense against critics intent upon the shaming of America. With America: Imagine the World Without Her, D'Souza asserts his unwavering belief in the country he loves, and his faith in a hopeful future forged from its incomparable past. 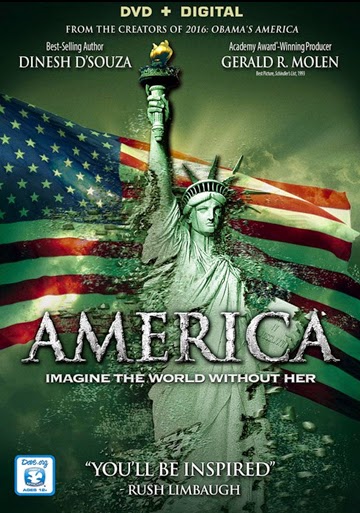 Awarded the Dove Seal of Approval, the stirring America: Imagine the World Without Her Blu-ray and DVD include over 40 minutes of additional footage including complete interviews with Ted Cruz, Ward Churchill, John Fer, Niall Ferguson and Star Parker along with extended scenes.