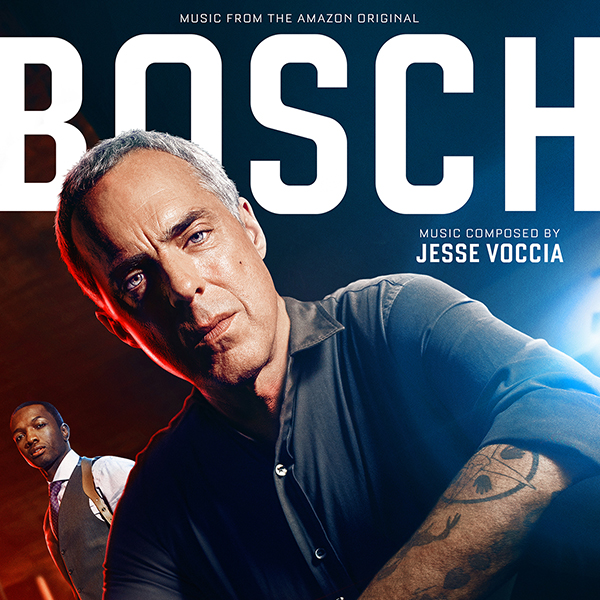 Varèse Sarabande will release the BOSCH – Amazon Original Soundtrack digitally on April 21 and on CD April 28, 2017. The album features the series theme song “Can’t Let Go” performed by Caught A Ghost and the original music from Seasons 1, 2, and 3 composed by Jesse Voccia (THE BIG C, A HAUNTED HOUSE 2).

“The first thing I actually scored was the first scene of the first show,” said Voccia. “It is a relatively long foot pursuit through downtown LA. It has almost a "French Connection" feeling to it with several changes of atmosphere, location and intensity. It is the first time we meet Harry Bosch and his partner Jerry Edgar.”

Based on Michael Connelly's best-selling novels, BOSCH stars Titus Welliver as LAPD homicide detective Hieronymus “Harry Bosch”.  BOSCH Season 3 promises to be the most compelling yet…angered by the truths behind his mother’s murder, Bosch struggles to find integrity in an imperfect justice system. The killing of a homeless veteran, the suicide of a serial killing suspect, and the high-profile murder trial of a Hollywood director pit Bosch against ruthless opponents who all threaten to destroy him.

“One thing that surprises people is when I tell them that a lot of what they are hearing on Bosch is played on my Sho-Bud pedal steel guitar,” Voccia explained. “The instrument is usually associated with country music, but I found a way to use it that creates a “noir" atmosphere that perhaps leans ahead in time instead of evoking the past. To paraphrase a line from the film Chinatown, ‘LA is a city next to the ocean, but also built on the edge of a desert.’”

Jesse Voccia is an established composer, multi-instrumentalist and music producer who has worked on more than 50 feature films from studio blockbusters to independent documentaries.  Other composing credits include the comedy A Haunted House 2, Showtime’s The Big C, action thrillers Ca$h and Game of Death, the supernatural thriller I Will Follow You Into the Dark and the award-winning surf documentary Splinters. In addition to his film and television scores, Jesse’s music, sounds (and sometimes singing) can be heard in movie trailers, commercials, films and television shows through his company Agami Music.