Lakeshore Records: "47 Meters Down" by tomandandy 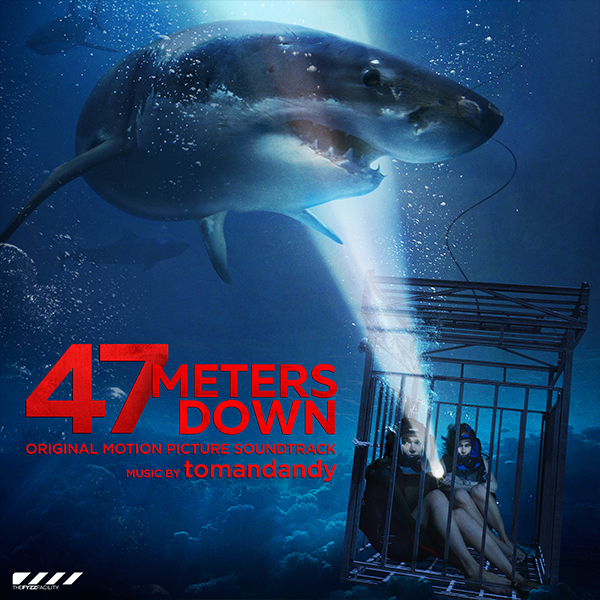 Lakeshore Records will release 47 Meters Down- Original Motion Picture Soundtrack digitally on July 28, 2017. The album features original music by tomandandy (The Rules of Attraction, Wish Upon).

“Johannes [Roberts, director] had a very clear vision from the beginning,” said Tom Hadju (of the duo tomandandy). “He wanted the score to be savage and raw — violent even. He really encouraged us to take extreme measures.” Andy Milburn added that when composing for the film, “we started with the snapping of the cable and fall to the ocean floor. We wanted to develop the colors of the score, and that scene needed all of them. It was really the crucible in which we could find just how noisy and crazy and brutal we could get.”

On the rebound after a devastating break-up, Lisa (Mandy Moore) is ready for adventure while on vacation in Mexico with her sister Kate (Claire Holt). Still, she’s apprehensive when two handsome, fun-loving locals (Yani Gellman and Santiago Segura) suggest the girls join them for a shark-diving excursion on a boat skippered by Captain Taylor (Matthew Modine).

Lowered 16 feet into the Pacific Ocean in a rickety cage, Lisa and Kate catch a once-in-a-lifetime, close-up look at a group of majestic Great Whites. But Lisa’s worst fears materialize when the cage breaks away from the boat and plummets 47 meters–more than 150 feet–down to the seabed. To their horror, the sisters discover they are too deep to radio for help without leaving the cage and making themselves vulnerable to the voracious sharks, and a rapid ascent would lead to the potentially deadly condition known as the bends. With their oxygen supplies rapidly dwindling, the girls do everything in their power to get to safety, even as a series of calamitous events makes it increasingly likely they won’t escape their underwater prison alive.

A terrifying tale of survival set in the domain of the ocean’s fiercest creatures.

Born in 1990s’ New York City, tomandandy has long been a mysterious and subversive force in music for media. tomandandy has created original music for feature films by Academy Award®-winning filmmakers, including Oliver Stone and Roger Avary; produced music with recording artists, among them Lou Reed and David Byrne; and collaborated with such artists as author William Burroughs, performance artist Laurie Anderson and visual artist Jenny Holzer. Their recent credits include scores for Resident Evil: Retribution, There Are Monsters and the recently released 47 Meters Down.