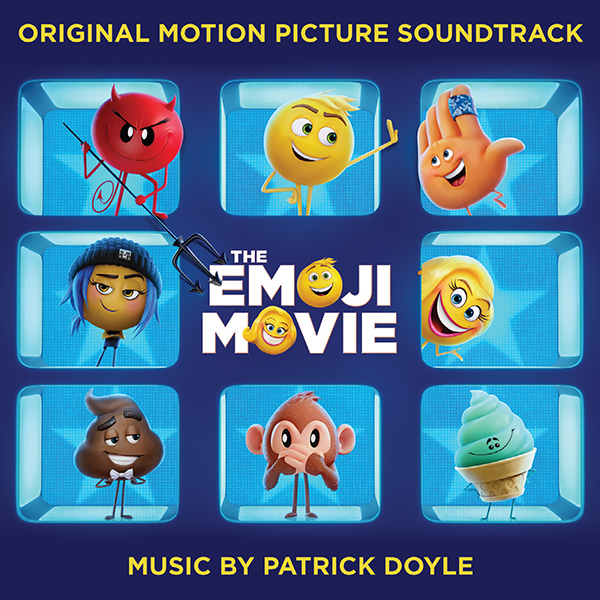 Sony Classical proudly announces the release of The Emoji Movie (Original Motion Picture Soundtrack) with the music of Oscar® nominee Patrick Doyle. The soundtrack will be released on July 28 and the movie opens in theaters nationwide on the same date.

The Emoji Movie unlocks the never-before-seen secret world inside your smartphone.  Hidden within the messaging app is Textopolis, a bustling city where all your favorite emojis live, hoping to be selected by the phone’s user. In this world, each emoji has only one facial expression – except for Gene (T.J. Miller), an exuberant emoji who was born without a filter and is bursting with multiple expressions. Determined to become “normal” like the other emojis, Gene enlists the help of his handy best friend Hi-5 (James Corden) and the notorious code breaker emoji Jailbreak (Anna Faris). Together, they embark on an epic “app-venture” through the apps on the phone, each its own wild and fun world, to find the Code that will fix Gene. But when a greater danger threatens the phone, the fate of all emojis depends on these three unlikely friends who must save their world before it’s deleted forever. Directed by Tony Leondis.  Produced by Michelle Raimo Kouyate.  Screenplay by Tony Leondis & Eric Siegel and Mike White. Story by Tony Leondis & Eric Siegel.

ABOUT THE COMPOSER: Patrick Doyle is a classically trained composer of film, television, theatre and radio. He graduated from the Royal Scottish Academy of Music in 1975 and was made a Fellow of the Royal Scottish Academy of Music in 2001. Doyle has scored over fifty feature films, including Harry Potter and the Goblet of Fire, Gosford Park, Sense and Sensibility, Indochine, Carlito’s Way and A Little Princess.

His work has led to collaborations with some of the most acclaimed directors in the world, such as Régis Wargnier, Brian De Palma, Alfonso Cuarón, Ang Lee, Chen Kaige, Mike Newell and Robert Altman. Doyle's creative relationship with director Kenneth Branagh has resulted in many of his best-known scores over the past twenty-five plus years for films such as Henry V, Hamlet, Frankenstein and Thor.

Doyle has received two Oscar® nominations, two Golden Globe® nominations and two Cesar nominations. He won the 1989 Ivor Novello Award for Best Film Theme for Henry V and has also been honored with a Lifetime Achievement Award from Scottish BAFTA and the ASCAP Henry Mancini Award.
Jeremy [Six Strings]
Hosted by Jeremy [Retro] at 10:24 AM