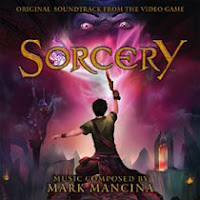 
La-La Land Records and SCEA present the original score to the new videogame SORCERY. Renowned film composer Mark Mancina (SHOOTER, SPEED, TWISTER, BAD BOYS) brings his cinematic musical muscle to this exciting, fantasy-based, dungeon-crawling game in which the player is a powerful sorcerer's apprentice who must master the Magick of the Faerun in order to drive back the Nightmare Queen, who has broken an age-old contract with mankind. Mancina fashions a powerful, imaginative musical score that whisks the listener into the game's fantastic world and beyond. This special CD release is limited to 3000 Units.
5/5 Epic and Fantasy Filled!
-Jeremy [Retro-Zombie]

-----------------------------
ABOUT SORCERY
Sorcery puts the power in the players’ hands using the PlayStation®Move motion controller to conjure and command powerful magic as they brave the dark world of the Faerie Kingdoms. On their journey, players will encounter a multitude of enemies, solve ingenious puzzles, learn powerful spells, and craft strange potions immersing them in a unique fantasy adventure like never before. As a young sorcerer’s apprentice named Finn, it is up to the player to master the arcane arts and fight back the the Nightmare Queen who has broken the ancient pact with mankind and threatens to cover the land in eternal night.
Hosted by Unknown at 2:01 AM