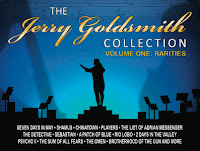 In the early 60s Goldsmith moved more into the feature film realm, earning widespread acclaim for his score for the western Lonely Are the Brave and his first Academy Award nomination in 1962 with Freud. Throughout his long career, Goldsmith with be nominated 17 more times, for A Patch of Blue, The Sand Pebbles, Planet of the Apes, Patton, Papillon, Chinatown, The Wind and The Lion, The Omen – nominated for original song and earning the Award for original score – The Boys From Brazil, Star Trek: The Motion Picture, Poltergeist, Under Fire, Hoosiers, Basic Instinct, L.A. Confidential, and Mulan. He would also earn 5 Emmy Awards, for The Red Pony, QB VII, Babe, Masada and Star Trek: Voyager. His credits also include beloved films and cult classics including Gremlins, Rudy, The Secret of N.I.M.H., First Blood, Total Recall, Basic Instinct, The Mummy, Logan’s Run, The Great Train Robbery, and Alien.

Jerry Goldsmith Vol. 1: The Rarities features 23 tracks of new recordings of some of Goldsmith’s rarely heard themes including a Dominik Hauser’s recording of the complete score for Seven Days in May, the unused theme for the modern crime thriller 2 Days in the Valley, “Comes The Night” from the rarely screened Sebastian, Chuck Cirino’s rendition of Goldsmith’s theme from Rio Conchos, arranger Joohyun Park’s take on “The Sentence” from Warlock, vocalist Katie Campbell’s interpretation of the theme from The Illustrated Man, and “If We Could Remember” from one of his final films The Sum of All Fears.
3/5 Good, I prefer the originals!
-Jeremy [Retro-Zombie]
Hosted by Unknown at 2:01 AM