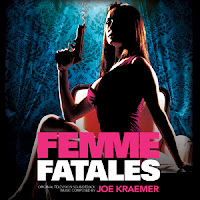 
Singled out as a main contribution to the overall success of the series by creator Mark A. Altman, Joe Kraemer’s music for the Cinemax anthology series Femme Fatales is an exciting, dark and sensual listening experience.
Featuring over 66 minutes of music (one selection from each and one of the 24 episodes comprising the first two seasons of the show), MovieScore Media’s soundtrack album is released digitally online and on CD following the premiere of season 2 on May 29. Illustrating the impact of The Way of the Gun composer Joe Kraemer’s music, Mark A. Altman said: “When I made my own directing debut with the classic noir episode, Something Like Murder, I told him I wanted a score that combined the epic romantic sweep of John Barry’s Body Heat with the menace and foreboding of Jerry Goldsmith’s Chinatown. Rather than me intimidated by that tall order, he delivered what was my favorite score of the season.”
Let's say the word "sexy" to describe this score... okay maybe not, but if you have watched the Cinemax Series you might be able to say it. It is a dark journey that will weave it's way into your heart as it fills each track to each episode. Joe Kraemer hits it on the head!
-Jeremy [Retro-Zombie]