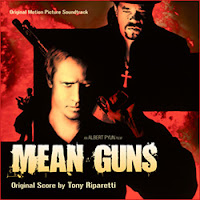 Score by: Tony Riparetti
Review by Alan Rogers
http://www.maintitles.net
"Any questions?....Yes, where can I get this CD?"
Review of the limited release Near the beginning of Albert Pyun's 1997 low-budget crime thriller Mean Guns, Syndicate boss Vincent Moon (Ice-T) is explaining the “rules of engagement” to 100 criminals he has brought together in a newly-built prison. Rather than have these individuals (who have at one-time-or-another crossed Moon) killed he offers a pot of $10 million to the three remaining people who can survive the to-the-death game that is about to start. When Moon asks for any questions, Lou (played by Christopher Lambert) pipes up, “Yes...where can I get this CD?”. Vincent Moon is a fan of Cuban mambo-style music and constantly plays mambo CDs through the prison's PA system during the course of the film. Lou's question refers to the music heard through the PA system that is also heard on the film's soundtrack. This film's soundtrack is one that frequently blurs the line between what is non-diagetic (traditional film scoring) and diagetic music (music heard by the film's characters). At the time of the film's release there were several calls of the release of this score because of its distinctive music (and its use) and Howlin' Wolf Records have now released Tony Riparetti's mambo-styled score on CD which features Riparetti's score as well re-recordings of a couple of mambo songs featured in the film.