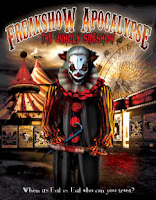 Freakshow Apocalypse: The Unholy Sideshow
A brand new epic myth of our modern apocalypse. The Order of Mystery, a secret society of necromancers dating back to ancient Sumeria, control the fate of the world. It is their duty to push back the armies of the abyss every 200 years through a series of ritual sacrifices. The Unholy Sideshow, a family of serial killer, black magician sideshow freaks, are next for the job that has prevented the coming of the dead for thousands of years. A bitter feud between Malerkus and Lazari, two mad scientist black magicians, causes the ritual to be delayed, setting off the balance of the living and the dead. It is up to The Amazing Barry Silver, a young magician and fakir, to stop them. With the help of The Enigma, a gum-shoe detective and guardian of The Order, Barry must stop Malerkus and Lazari before time runs out. As society has grown weak and deceitful so has the Order of Mystery. Witness the beginning of this action filled saga where evil battles evil while the fate of mankind lies in the hands of the twisted and deranged. If the ritual is not set in motion, and the Unholy Sideshow is not up to the task, the gates of the abyss will cover the earth in darkness. In a world of fire breathing vampires, modified killers and an onslaught of zombies, no one is safe. When it's evil vs. evil who can you trust?
I am not sure what was going on, but it had some great freakshow stuff... the story I don't know so I am rating thing for the performances not the story... Oh this is only part one, I cannot wait to see what part two brings.
8/10 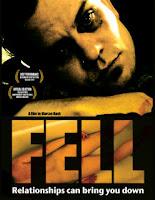 FELL: Relationships Can Bring You Down


Bill has problems. He lost his job, he quit the band, his medications are running out, and his relationship with his ex-girlfriend, Jenny, has gone down the drain. But now he has an even bigger problem, there is a dead girl in his bathtub, and he can't remember how she got there. Bill's best friend, Derrek, is the only person he feels he can trust. Together they need to figure out who she was and what to do with her decomposing body. Relationships can bring you down.
FELL is a challenging, relentless exploration of psychological turmoil that evokes Polanski's Repulsion - Behind The Couch
Okay here is another one that is interesting, but like an hour too long... I got the idea in a few minutes and then it went on and on. I find myself fast forwarding most of the time, it had that creepy edge. Just get there and let's all share in the madness... you are crazy to think we are not going to snap...
4/10

Chemical Burn Entertainment
Hosted by Unknown at 2:02 AM