Dolph Lundgren's DETENTION.....Yea, I never heard of it either. 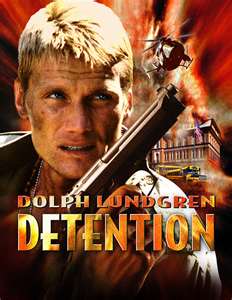 DETENTION stars Dolph Lundgren as Sam an ex-soldier turned history teacher at an inner city high school. Burned out from teaching a bunch of ungrateful loud mouth trash talking yahoos, Sam turns in his resignation papers. It is his last day at school and he is asked to stay late and watch the detention students. Bad guys show up and turn the day into a really bad rip off of DIE HARD.

First thing you are going to notice is that there are a total of only five bad guys. That's bad. The reason being that you know that the action scenes are going to be few or many and unimpressive. DETENTION has many action scenes. Almost every action scene goes like this: Bad guy enters room. Bad guys shoot at nothing for five minutes. Dolph Lundgren dodges bullets and escapes. There really isn't much of Dolph kicking butt. He is either great at dodging bullets or all the villains are expert shots shooting silouettes around moving targets the size of Dolph Lundgren.

The five bad guys (one is a cop and former soldier that toured with Sam) use the school as some kind of base of operations to steal a van full of drugs being transported by the police. If you really think about it that really isn't very smart. In fact it takes a lot of work to take over a school even if you are only expecting one security guard. I understand that they use the school garage to transport the drugs into a different vehicle but couldn't they just use an empty warehouse somewhere instead of school that has alarms and cameras and such. They actually steal the drugs with ease but instead of driving away with the merchandise they all stick around so they can be killed by Dolph and the bratty kids still trapped inside the school. The bad guys plan on stealing the drugs and selling them to the secret service. That don't make no sense, Yo. I guess the secret service is big into the whole drug dealing scene. The movie shows the bad guys lining the seats of a van with the stolen drugs but the drug exhange is done by helicopter at the school. That don't make no sense either. Why not go to a different location with the drugs, tell the secret service that you are changing the place of exchange and then blow up the school? They were going to blow it up anyway. Another thing. What is all this buisness about being trapped in a school? Have you ever heard of emergency exits? They are never locked and they sound alarms to notify the authorities of bad stuff going down. Or how about breaking a window or glass door? I know one thing. If you and I were trapped in a DIE HARD situation I would break out the nearest window and leave your butt behind. I'm a nerd on the Internet, not Rambo.